If you’re ever curious about what does the groom throw at a wedding, it is the bride’s garter. We will talk in more detail about the symbolism of why the groom would throw a piece of the bride’s outfit, more so, considering that it’s lingerie.

Contents show
1 What Does The Groom Throw At A Wedding And Why
1.1 How to do the garter toss?
1.2 What comes first garter or bouquet toss?
1.3 Which part of the garter do you toss?
1.4 Is the garter toss awkward?
2 Why Do Grooms Throw The Garter?
3 What Else Can A Groom Throw Besides A Garter?
4 What Do They Throw At Weddings To Catch?
5 Conclusion

Furthermore, we’ll share some potential alternatives to this tradition if you don’t find it suitable for your taste. And for those who want to gift the bride a garter for the wedding, we’re glad to share with you an easy tutorial on how to make a wedding garter belt. 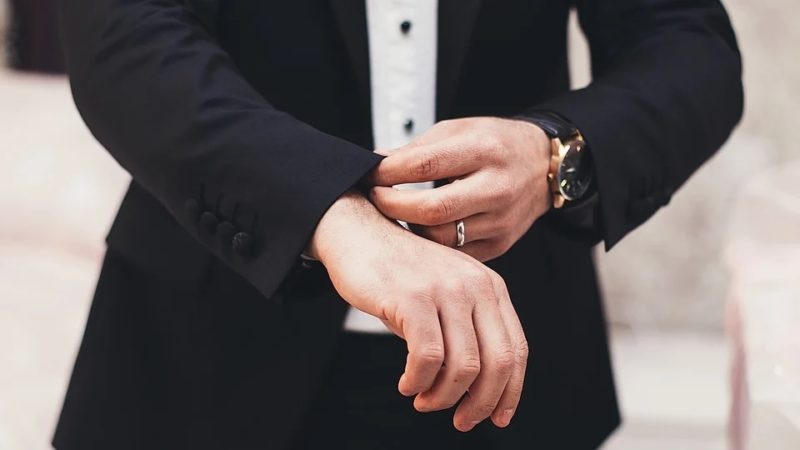 What Does The Groom Throw At A Wedding And Why

How to do the garter toss?

The garter toss is part of the wedding reception, and the wedding MC usually announces it. Then, the crowd will gather to watch the unmarried male guests try to catch the bridal garter.

The bride typically sits in a chair as her groom goes under her dress. Nowadays, grooms tend to do this teasing and comical to entertain the crowd.

He can use his teeth to remove the garter to get more reactions from the cheering wedding crowd. Then, he’ll toss the garter to the bachelors, and whoever catches it usually gets paired to dance with the bachelorette who caught the bridal bouquet.

The bouquet toss of the bride usually comes first before the garter toss of the groom. Whoever catches the bouquet will then dance with the bachelor who caught the garter.

In some weddings, the person who caught the garter will also put it on the woman who caught the bouquet. This moment can be a fun part of the reception, especially if the single people are very into it.

Which part of the garter do you toss?

The bride can choose to wear two wedding garters or not. But if she’s wearing two on the same leg, the one placed lower gets to be taken and tossed out by the groom to the crowd of single men.

There are no rules regarding whether you’ll toss the garter on the right or left leg. But if you want, you can always talk with your partner to smoothly do this exciting wedding tradition.

Is the garter toss awkward?

The garter toss is more of a fun way to entertain the crowd before the dancing part of the reception starts. But, understandably, it might feel awkward to some, especially those who don’t like being the center of attention or being paired and teased with another single person.

To avoid having anyone feel uncomfortable, talk with the MC on which people to include in the garter toss. Of course, the bride might also feel awkward about this tradition, so know that it’s acceptable to omit it altogether if preferred.

Why Do Grooms Throw The Garter?

The groom would throw the garter during the wedding as part of the various traditions that have been around for many years. During the dark ages, it was considered good luck when you took home a piece of the bride’s clothing.

The garter toss even has a darker history, which would be unacceptable nowadays because it is used to prove the consummation of marriage. However, there are also times when bachelors would race from the church to the bridal home, and the bride would toss the winner the garter for good luck.

Read about what is a wedding garter to know more about this iconic item.

What Else Can A Groom Throw Besides A Garter?

Understandably, some part of the wedding crowd or the newlyweds themselves might feel awkward with the idea of male wedding guests trying to catch a piece of the bride’s lingerie. As such, it’s not unusual nowadays to see an alternative to the garter toss.

Instead of the bridal garter, the groom will throw his boutonniere. The notion implies that whoever catches it will be the next to get married or the bachelor also gets paired with the catcher of the bride’s flower arrangement: her bouquet.

The groom can also throw something of interest, such as a baseball or football. These alternatives can also be just as entertaining as people get to be competitive.

What Do They Throw At Weddings To Catch?

As part of the wedding reception activities, the bride would throw her bouquet and the groom his bride’s garter. The crowd of single women and men would try to catch these items as part of good luck or even believe that they’ll be next to get married.

And that’s it! We just found out what does the groom throw at a wedding, which is the bridal garter.

He’ll toss it to the crowd of single men, much like how the bride gets to toss her bouquet to the single ladies of the crowd. However, if the garter toss seems awkward, consider alternatives like the groom throwing his boutonniere instead.