Those curious about what does the bride throw at a wedding can read more about the bouquet toss tradition. You probably have an idea of the beliefs surrounding this custom, but it’s always interesting to know more about its history and if there are alternatives for it.

Contents show
1 What Does The Bride Throw At A Wedding: Everything To Know About The Bouquet Toss
1.1 What is the bride toss tradition?
1.2 What is the meaning behind a bouquet toss?
1.3 Why does the bride throw the bouquet at her wedding?
2 What Do Brides Carry Down The Aisle?
2.1 What can you carry down the aisle instead of flowers?
3 What Are The Flowers That The Bride Throws?
4 Do Brides Still Throw The Bouquet?
4.1 What can I use instead of a bouquet toss?
5 If You Catch The Bouquet At A Wedding Do You Keep It?
6 Conclusion

And speaking of traditions at weddings, the groom also gets to toss something. To know more, read the other discussion on what does the groom throw at a wedding. 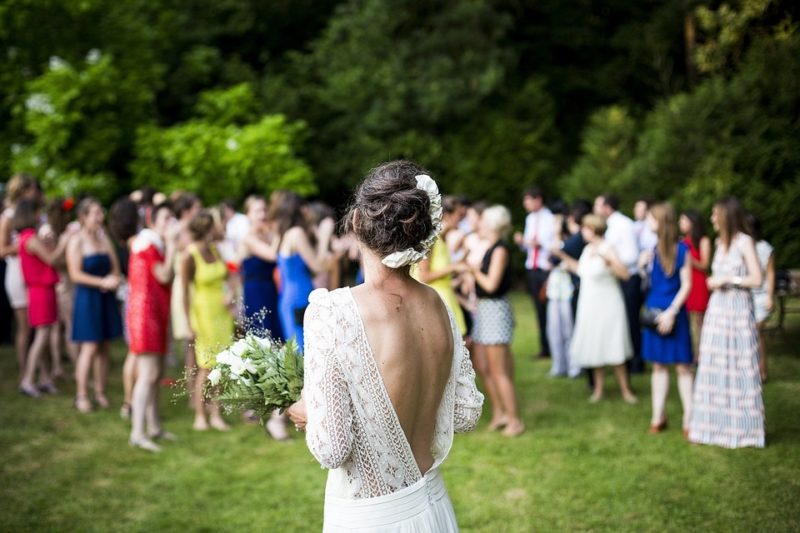 What Does The Bride Throw At A Wedding: Everything To Know About The Bouquet Toss

What is the bride toss tradition?

Usually, the people who caught the bouquet and garter will be partnered together, and they might even share a dance. Both are also believed to be next in line to get married someday, which is why it’s a fun activity.

What is the meaning behind a bouquet toss?

Another interpretation can be traced to how it’s believed to be good luck to touch the bride. Eventually, this turned into how it’s good luck to get something she’d worn instead of trying to touch her or rip a piece of her wedding gown.

The bouquet toss was even a distraction. As the crowd tries to catch the bouquet, the newlyweds make a break for it.

Regardless, whoever catches the bouquet means good luck. But if you don’t want to relate any symbolism to it, it can just be a hilarious activity at the reception.

Why does the bride throw the bouquet at her wedding?

There are different traditions regarding why the bride would throw a bouquet at her wedding. As discussed, the bouquet toss distracts the guests because it was believed that getting a piece of her clothing is good luck.

Then, catching the bouquet itself is also thought to represent good luck, and whoever catches it is believed to get married next. However, there are also other cultures where the bride used to throw a bouquet of herbs to ward off evil spirits.

What Do Brides Carry Down The Aisle?

The wedding bouquet is not only thrown at weddings. Traditionally, the bride also carries it down the aisle; then, she’ll hand it to her maid of honor during the wedding ceremony.

But why do brides carry a bouquet down the aisle? From a symbolic perspective, holding a bouquet was thought to help ward off bad luck and evil spirits because it’s made of aromatic herbs and spices like dill.

And as time passed, the bouquet became an essential part of bridal aesthetics, thanks to Queen Victoria. First, the influential style icon Queen Victoria carried flowers at her wedding to Prince Albert, leading to more brides using flowers as a wedding accessory.

What can you carry down the aisle instead of flowers?

Non-conventional brides can carry an alternative to a bridal bouquet, whichever they find fitting for the type of wedding they’re having. For example, there are weddings where the bride is carrying a lantern, umbrella, fan, greenery, wreath, book, jewelry, or even a purse.

What Are The Flowers That The Bride Throws?

Throwing a wedding bouquet means that whoever catches it is next to get married. However, you can make it even more sentimental by hand-picking the flowers on the bridal bouquet.

The most common flowers loved by brides for the bouquet toss include:

For more tips regarding choosing what flowers to use at your wedding, refer to how to pick wedding flowers.

Do Brides Still Throw The Bouquet?

Brides still toss their bouquets at most weddings nowadays. Sometimes, it’s the preferred custom over the garter toss or the groom will find an alternative item to throw instead of the bridal garter.

But since more and more weddings are out-of-the-box, can the bride throw something else than her bridal bouquet? What can be an alternative to the bouquet toss?

What can I use instead of a bouquet toss?

The bride can toss anything from a gift card, pillow, or even a small gift box instead of the bouquet. As long as it will be fun for the reception, there are no rules on what you can throw.

As for the custom itself, the bridal toss can be replaced by simply handing the bouquet to a specific female guest. Some couples also have a dance instead of the toss traditions.

If You Catch The Bouquet At A Wedding Do You Keep It?

Whoever catches the bridal bouquet can keep the flowers. It is considered good luck or that the bride has passed her good fortune to you, and it can even be your memento from the wedding.

And that’s it! To recap what does the bride throw at a wedding, it is the bouquet.