If you want to know why does my water bottle smell like mildew and you can deal with it, then you found your right match! The answer to this would be because there is either mildew or other bacteria and dirt collecting inside it.

Contents show
1 How To Remove Mildew Smell From Your Water Bottle
1.1 Step #1. Collect some cleaning tools
1.2 Step #2. Pour the vinegar into the bottle
1.3 Step #3. Empty the bottle, rinse, then wash
1.4 Step #4. Rinse and thoroughly dry your water bottle
1.5 Is mildew in a water bottle dangerous?
1.6 How often should you wash a water bottle?
2 Conclusion

Imagine drinking from a container when you’re thirsty and then suddenly sniffing something musty while you’re gulping. No matter how parched you feel, you’ll probably consider spitting it out, and we’ll discuss later why you should. 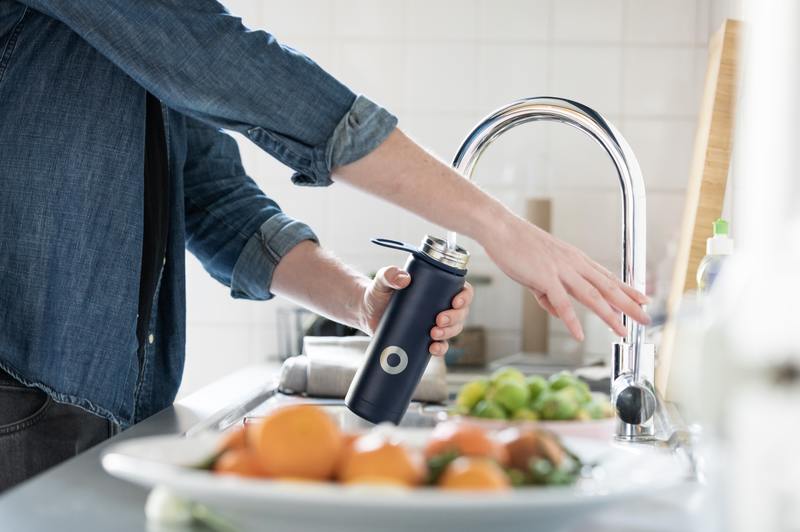 While there are molds that are not deadly in their toxicity when ingested, we recommend that you stay away from them as much as possible. It is necessary to keep your place clean, especially the utensils and other things related to your food since mold and mildew are too relentless in finding new spots to survive.

How To Remove Mildew Smell From Your Water Bottle

As mentioned, a musty smell will surely confirm that something musty is living in there. Since water bottles are generally long and narrow at the same time, it can be tricky and challenging to clean them regularly.

If you want to get such an awful smell off, here’s what you have to do:

To start, you need to pick up all the things you’ll need to do a thorough clean. Most of it should be found at home so there’s little need to run to the store.

After collecting all the listed items, empty your water bottle down the sink.

Step #2. Pour the vinegar into the bottle

After emptying your bottle, let it stand upside down so most of the water trickles out. This will allow the cleaning solution(vinegar) to touch all the interior surfaces of the bottle and kill all the fungi causing the mildew build-up.

Let about 10-15 minutes pass then pour at least 3 tablespoons of white/clear vinegar inside the bottle. Shake the bottle vigorously then take your bottle cleaner and thoroughly brush through its inside.

After the brush, pour some warm water into the bottle until it’s half-full, then shake it again.

After shaking, empty the contents of the water bottle into your drain again.

Note that while you can use bleach to kill molds and mildew as well, it can be a health hazard if you are unable to rinse it well enough.

Now that the bottle is empty, rinse it twice with tap water then pour some dishwashing liquid into it and brush again with the bottle cleaner. This will rid any mildew or fungi left as well as get the vinegar smell and taste off your bottle.

Use the toothbrush to clean through the opening of your bottle, especially where bumps where the cover locks into. Don’t forget to wash the outer side of your bottle with the dishwashing soap and sponge as well.

After the soap, make sure you rinse the water bottle inside and out with clean tap water at least three times. Fill it with water and shake it vigorously to eliminate anything stuck on the inner walls.

Rinse your bottle until there are no more bubbles and the water comes out clear after shaking it. You can check if it’s ready by smelling it, too.

After which, air dry the bottle. Make sure it has completely dried off inside and out before using it again.

Is mildew in a water bottle dangerous?

Most molds are not dangerous enough to send you to the grave when ingested in a small amount. However, that is not to say that it’s totally fine to just ignore any mold or mildew in your food, or in this case, drink.

The problem with molds is that when you’re allergic and extremely sensitive to them, you’ll most likely wind up in the hospital after drinking from a bottle inhabited by it. While it’s usually fine for small amounts, certain ingestion levels will cause repercussions like nausea and diarrhea.

How often should you wash a water bottle?

Ideally, you should be washing your water bottle daily especially when you’re carrying it with you every day. If your bottle has been stored for a while though, and you’re going to use it, follow our instructions above for cleaning.

Mildew can build up in a bottle because of saliva, sweat and other things stuck on inside when you don’t brush through it. Even without using vinegar, you should brush your bottle daily with soap and water.

Here’s an article on how to get rid of mildew smell naturally.

Now that the reason for the question “why does my water bottle smell like mildew” has been revealed, it will be easier for you to remove it and prevent it from recurring. As for any utensils, you should benefit from the absence of mold.