Are you curious why do dogs scratch their beds?

Just like us humans, our pets also have special rituals during bedtime.

If you have seen your dog biting, pawing, or scratching its bed before sleeping, you might have thought this is something odd.

But just like how we drink tea, put on some cream, or read a book before bedtime, there is also a reason behind this particular pre-sleeping behavior of dogs.

Scratching the bed as well as circling before they lie down helps the dog to mark the spot with their scent and chase unwanted pests away.

They can also figure out if another dog has tried to use their bed through their unique odor.

But do not worry too much about it because this behavior is perfectly normal for dogs.

All dogs of different backgrounds, breed, size, and age exhibit this.

For the very least, it only starts to show up when they are old.

But commonly, they begin to develop it at an early age.

So needless for you to worry that your beloved pet might be having some sort of mental disorder or that you did something wrong which resulted in this problem.

Now, to understand this peculiar behavior of your dog better read until the end to know the common reasons for bed scratching. 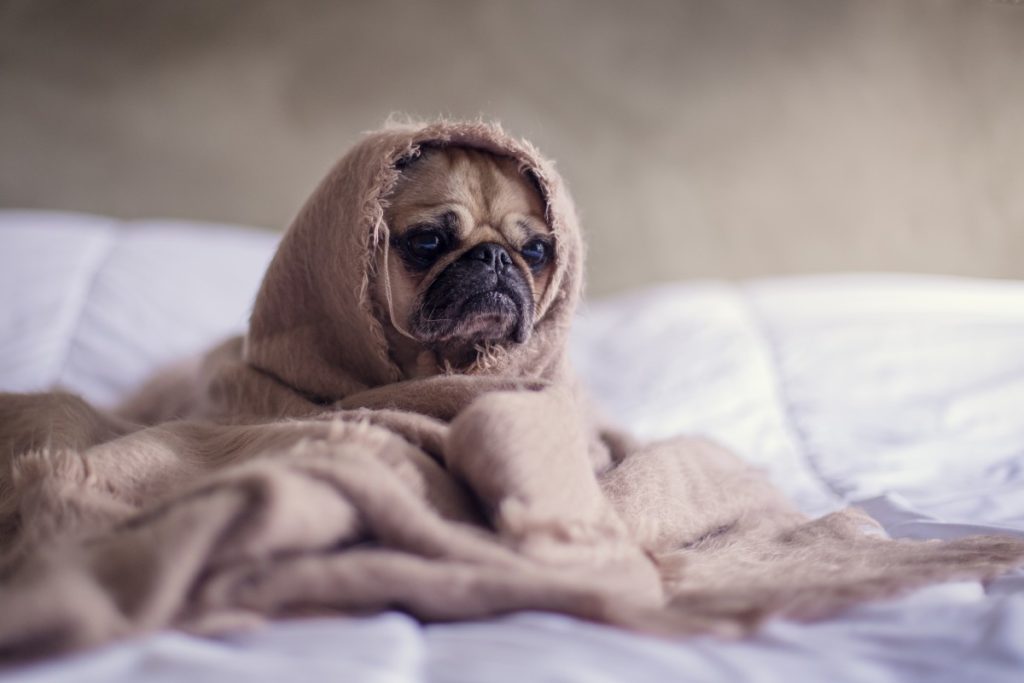 This behavior is characterized by rolling, scratching, and pawing around the resting area of the dog.

Most dogs would circle their bed repeatedly before they finally settle down.

Other dogs would create a cave or a tunnel beneath the blankets for them to hide.

They usually treat their bed as a playground, but even if the area where they usually rest has no bedding, they would still scratch before sleeping.

The same is true wherever the dog decides to take its rest, may it be on the kitchen tile on your kitchen or anywhere else.

Reasons Why Dogs Scratch Their Beds

So, why do dogs scratch their beds?

There could be numerous factors that may have caused the habit of your dog to scratch its bed.

It may be due to some of the following.

Scratching the bed is a natural instinct among dogs.

Even the dogs in the wild would scratch at pine needles, dirt, and leaves to make comfy bedding.

They would dig and circle the shifted rocks, grass, and sticks to find a uniform position.

Aside from having a comfortable spot to rest, this will also help in protecting them against predators.

When they sleep, they won’t be easily found.

Furthermore, if they burrow under the dirt and the leaves they would be able to escape extreme weather conditions.

Even domesticated dogs have the same instincts which is why they would often build a fort onto their blankets.

Scratching the bed is also a territorial behavior of dogs. It is natural for them to put a mark on their territory.

Usually, they would urinate on things that they want to claim as theirs. But that is not the only way of doing it.

The claws of the dogs have glands which is why they can leave a distinctive odor onto their bedding as they are scratching it.

To you, it might seem that your dog is simply playing with its blanket, but he is smelling the space that it made as his own.

They will only settle down on a particular spot after they made sure that it is theirs.

Furthermore, the bed scratching behavior of dogs tends to intensify when there is a new person or pet arrived in the house.

It is also possible that the dog learned this behavior.

While it can be considered territorial if a dog starts to scratch the bed as soon another dog moved to the house, it can also be mimicked or learned.

Your old dog might copy the other dog’s behavior.

For instance, as the new dog scratches or circles to mark his new spot, the other dog might join for fun.

Scratching the bed is also one of the maternal instincts of dogs.

So if your dog is pregnant, you will see that her bed-scratching behavior will intensify.

In this regard, it is considered as nesting – a hormonal and natural response.

In other words, the mother dog is preparing a nest for her pups to ensure that they will be safe and warm when they arrive.

How To Manage Scratching Behaviors

As mentioned, bed scratching is natural among dogs.

You cannot eliminate this behavior by simply giving them a comfortable space to sleep.

Believe me, even if you buy the highest quality dog bed, the issue won’t be solved.

But you can try the following tips to minimize damages.

So the reasons why do dogs scratch their beds are natural, territorial, and maternal instincts.

But it can also be a habit that they will eventually learn.

Emily Wide
Posted in:
Beds
Previous article
How To Wear Your Hair To Bed? 4 Best Ways!
Next article
What To Eat Before Bed To Build Muscle? 5 Best Choices!
No more posts found in this category.