Do you know how to spot a fake Hudson Bay blanket? If you live in North America, chances are that you’ve seen a Hudson Bay blanket at some point. It is a wool blanket designed with a series of stripes and points, commonly white with green, red, yellow, and indigo stripes. 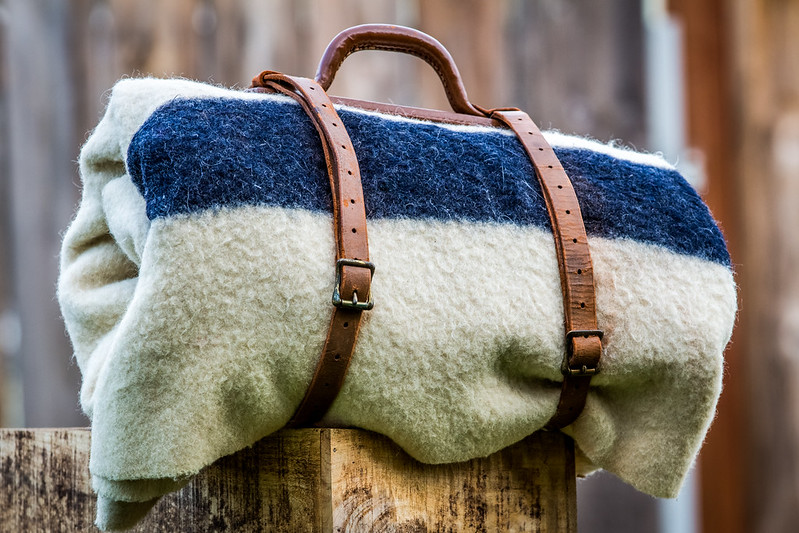 How To Know If A Hudson Bay Blanket Is Fake

The Hudson Bay blanket may be a Canadian icon. However, unlike Tim Horton’s, one of these will set you back a couple of hundred dollars. You don’t have to worry about the price as it will last for generations — if you have an authentic one, that is.

Hudson Bay blankets are made of 100% wool and have an authenticity seal on one corner that indicates the year the Hudson’s Bay Company was incorporated: in 1670. The HBC authenticity label was explicitly created to distinguish HBC blankets from other similar-looking ones, such as the ones made by Oregon-based blanket company Pendleton, which started producing their blankets in 1916.

The Hudson Bay Point Blanket was traditionally made in plain colors with a singular bar, called a heading on either end. However, over the years, the company has created different designs to accommodate the preferences of Indigenous nations.

The Hudson Bay point blanket was initially traded in Canada and the United States to the First Nations (Indigenous groups) in exchange for beaver pelts. In the 1700s, wool blankets accounted for over 60% of traded goods in North America. Today they have become collectibles that could rack up thousands of dollars for their authenticity.

To determine the value of the HBC blanket, determinants such as age, size, color, pattern rarity, and condition come into play. However, collectible point blankets such as the Queen Elizabeth II coronation blankets from 1953 or an even rarer 1937 coronation blanket can cost as high as $600 to $1,300.

The label was updated in April 2017, rotating it from portrait to landscape form, making it easier to display English and French markings on either side of the HBC crest. To celebrate Canada’s 150th Anniversary the same year, HBC also added a label on the blanket showing a photo of voyagers in a canoe, with the word “Canada” printed at the top.

The original HBC point blankets had a single blue or red stripe across each end. However, in the mid-1800s, the blankets were produced with a green, red, yellow, and indigo stripe on a white background. These four-stripe blankets became more popular and were easily produced using colorfast dyes.

It is not clear why these groups have different color preferences, but it is believed that they chose specific patterns and colors based on spiritual meanings and practical uses. The HBC blankets, however, do not come without controversies.

Some Indigenous People believe that the point blankets represented forces of colonization. It represented the imperial powers that dispossessed them of their lands and livelihood.

HBC had expanded their designs since their beginnings in the 17th century, but they do occasionally produce blankets for special events. For instance, they created a deep purple blanket with white stripes for the coronation of Queen Elizabeth II.

In May 2020, HBC celebrated its 350th Anniversary and released a series of limited-edition blankets in different designs and patterns. The company also added a “Special Edition” label with a picture of a sailing vessel and the words “Celebrating HBC’s 350th Anniversary.”

The blanket points are the short black lines woven into the hem of the blanket, just above the bottom set of stripes. They are usually about four inches in length, except for half points, about two inches.

The HBC point blanket has become very popular and is now considered an icon of Canadian style. The colors of the HBC blanket have even been used as part of the HBC collection brand and can be seen on products like umbrellas and smartphone cases.

Despite its popularity, the blanket colors and stripes have no specific meaning. However, the red, indigo, green, and yellow colors were popular during the reign of Queen Anne from 1702 to 1704 and are known to be Queen Annes’ colors.

Agnes Williams
Posted in:
Blankets
Previous article
What Is A Fire Blanket Made Of (Plus 2 Effective Usage Tips)
Next article
How To Make A Fleece Tie Blanket For A Baby In 5 Basic Steps!