I want to discuss the design concept, basic functions, some other different factors to consider, and two types of open front chicken coops in this article. 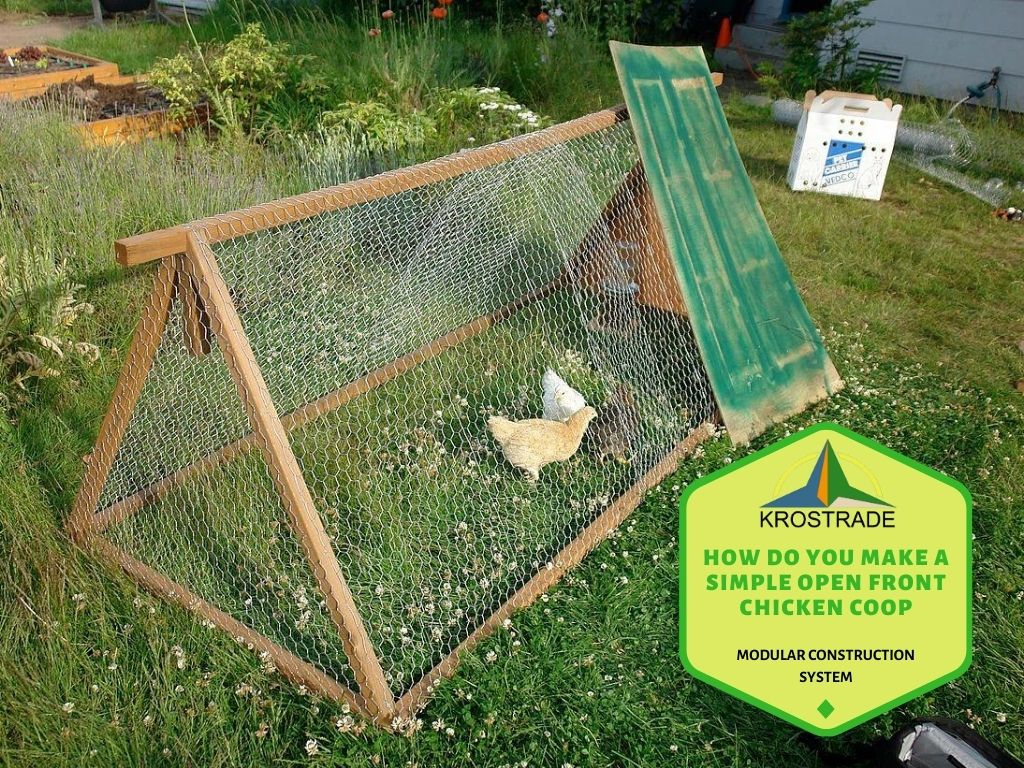 Chickens should be comfortable in the coop

Predators can be stopped in hurting the chickens.

It should add to the healthiness of a chicken and prevent them from diseases.

This model is significantly useful for seasons like summers and winters.  During the extreme weather conditions like heavy rain or chilled winter, the open front chicken coops are considered to be the best because they allow proper air ventilation. They also will enable enough sun rays can also reach out to the chickens, which is healthier in the sense that darkness makes chickens inactive.

Shelter: It protects the chicken from wind, sun, snow, and rain. Set up your open house chicken coop in such a way so that windy and colder corners should remain closed.

Sufficient Sunlight:  You must build up your coop in such a way so that the opening faces the sunnier side. A maximum opening in the front helps adequate sunlight and fresh air circulation.

Ventilation: The open front chicken coop is the best model that allows proper ventilation for the chickens. The pungent fumes created by the chicken droppings can be cleared to a great extent by appropriate airflow, which helps the chicken breath easily.

Protection: Close the front opening properly at night so that you can protect your chickens from snakes, foxes, cats, civets, etc.

The open front chicken coops can be of two types

Portable: Portable chicken coops have many advantages. The chickens in search of worms often wear and tear the floor of the coop, to fix the floor you can shift the coop once in a while on the other side of the back yard and plant some quick yielding grass which in turn repairs the ground in a quick span on time. This practice keeps your ground healthy and hygienic.

Fixed coops:  The large chicken coops are normally fixed in nature. If the coop you have bought is of this type, you need to be very wise enough to select the floor. In this case, concrete flooring with some artificial soft covers over it will work. You can clean the chicken droppings easily by cleaning the artificial soft covers.

Different factors need to be considered for selecting chicken coops

It would help if you considered many factors such as the number of chickens, breed, and size, as per the studies medium-sized coops required at least 1.5 sq ft of space.

Keeping in mind the factors, the different types of open front chicken coops are as follows.

Cocoon hatched chicken coops: This open front chicken coop comes with a string night shutter. The open front has a hen house and run, both combined in one unit. Hence it provides warmth as well as safety from the predators. The structure is made up of solid wood; hence it is sturdy enough. Its normal size is 220 × 75× 114 cm; if you are planning the coops in a shorter space, then this is the ideal one for you. A sliding door separates the run. Removable perches and next box in the coop makes the chickens comfortable & cozy for roosting. The flooring is coved with a rubber material; hence it is easily washable, and it gives warmth to the chickens as well.

Value pick open front chicken coop: This is another model that provides a run and coop combinedly. It can accommodate three to four chickens. It has a roosting perch and nesting box, which makes it very comfortable for the chicken. The measurement of this coop is normally 175×66×100 cm. It is smaller than the cocoon hatched chicken coops, and is less costly too. The structure is made up of the combination of plastic and wood; hence it is lighter in weight compared to the earlier model.

Feel good large chicken coop: This is yet another variety of open front chicken coop. It does not have a run in-built. It can accommodate 7 to 8 chickens at a time, depending on the size of the chickens.  Its normal size is 85×115×90cm, and it is made up of Firwood fixed with glue and screw. Nails are not used while making it. It can fit in two nesting boxes and three roosting perches. You can lock the front opening at night to protect the chickens against predators like snakes, foxes, cats, and many others.

Pets imperial coops and run:  This is the model which again supports the coop and run together under one roof. This model can accommodate 6 to 7 birds at a time. The total area covered can measures up to 250×76×103 cm. It offers the best outdoor run for your chickens. Inside the coop, you can fix 2 to 3 removable perches and nesting boxes. The roof of the coop can also be opened to clean the whole surface area. The run is well protected against predators, especially foxes, as it has a mesh build up with galvanized steel. It is one of the most expensive open front chicken coops and is made up of treated timber, which is animal friendly. The pull out galvanized metal tray is the unique feature of this model. 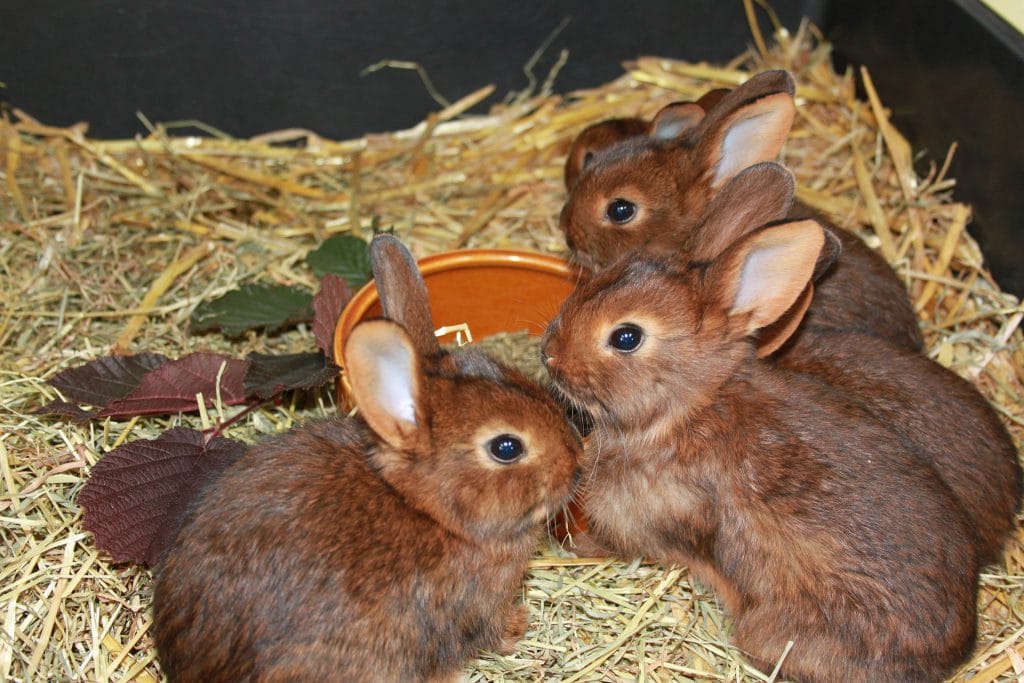 One of the important points to note when it comes to rabbitry is the rabbit breeding age limit. Knowing the age limit will enable you to make sure that the final output is of the high quality, and that you are taking into consideration the key milestones in rabbit breeding.

Rabbit housing is also important. Their shelter will affect their activities, and it must have the ambience and environment that these creatures need.

There are several types of rabbits in the industry, and we’ll get you with the rundown in this edition of the post.

First-time rabbit owners and breeders may want to have the American rabbit since this is a fantastic choice because of their sweet personalities. Beware though among children since this age group is not recommended to care of the rabbits since they tend to be shy and may bite if not cared for in the right way.

Next up is the Belgian Hare Rabbit, a very historic breed that traces back its existence from the 1700s. Being one of the oldest breeds, these rabbits thrive best outdoors in right spacing and food sources. Their personality is considered nervous, and may easily intimidate people if they do not announce their presence.

From the name itself, the Blanc de Hotot rabbit comes from France, and also known as the “black eyeliner” rabbit. Children can own them, and with their distinctive brushing requirements, it is always great and fun to be with them.

These Californian rabbits are known to be among the best rabbits to breed when it comes to having them for meats. These rabbits are hybrids of Chinchilla and Himalayan. And with its dense fur, it lets them enjoy both the indoors and outdoors. These rabbits love playtime and cuddling time.

On the other hand, the checkered giant rabbits are creatures at 13 pounds, perfect to be cared for by adults. As for their personality, these rabbits are considered very independent and less affectionate, but still can be gentle. You can easily spot these rabbits from the rest since they have spots on the nose.

A rabbit that has been developed in England during the 19th century, the Dutch rabbit is also very popular. They are extremely sociable so keeping them too much inside their cage may not be a great idea. They are also very easygoing, and children are known to care for them.

Then, you have the English lop, friendly rabbits that have made them earn their nickname “the dog of the rabbit world.” They have the title of being characterized by having long ears, and it comes to no surprise that they require big levels of maintenance. Aside from these, their ears must also be examined regularly and their nail care kept at its finest.

From afar, the English spot rabbits seem like it is frowning. But this bunny is close to every family, and they deserve to be brought outside their cages from time to time.

Can A Rabbit Be Too Old To Breed?

When it comes to the rabbit breeding age limit, is there a rabbit too old to breed? Experts advise against breeding old rabbits. They are saying that breeding older rabbits may be prone to heart attack and may just waste on your resources. The average breeding age cut off is until four years old.

What Is The Oldest Age A Rabbit Can Get Pregnant?

It could be at a maximum of nine months. Small female rabbit breeds can get pregnant between four to five months, while the male rabbits are ready to breed at six months. Medium-sized female rabbits may start to be bred at five to six months, with the medium bucks beginning at seven months.

Furthermore, the heavier breed does are prepared at six to eight months, while the heavy bucks are considered sexually mature at nine months.

Rabbit Breeding Age Limit: Can A Rabbit Get Pregnant At 3 Months Old?

Well, not exactly at three months old, but smaller rabbit breeds may get pregnant at three and a half years old.

Can I Breed My Rabbit At 4 Months?

Yes, but the ideal time to breed the rabbit begins in their fifth month. Four months can be considered quite immature for these rabbits and the owners, they might be given with outcomes that are not quite ideal for their requirements.

How Do I Know If My Rabbit Mate Is Successful?

There are indicators to tell that rabbit mating has been successful. For instance, you can tell from the fall-off and the grunt. You may also notice that the buck becomes all that macho, and may thump on the cage’s floor several times. On occasion, bucks may fire and nonetheless, miss.

Considering the right rabbit breeding age limit, and following these guidelines, you can tell whether the mating has been successful or not. For other breeders, this has been a success if the buck falls off backward or to one side. However, if he just humps the female breed, and does not fall off, the mating may not have been carried out.

Achieve Your Rabbitry Success With Krostrade.com

With Krostrade.com, you can have the resources you need to breed your rabbits right. Knowing about the rabbit breeding age limit makes this venture a highly successful one.

Understand that your rabbit is also part of the family, and during the time they are under your care, they must be bred well. This is to consider their color, size, fur type, personality, and more of their traits.

Getting into the rabbit meat processing, and preparing the breed for processing for meat is a different story. Having the right resources and the know-how on the rabbit breeding age limit will fulfill what you want for these breeds.

Jack Davis
Posted in:
Farming
Previous article
Is Raising Rabbits For Meat Worth It?
Next article
What Grows Well In Idaho
Leave a Reply Cancel reply
Load More