Slime mold is that foamy, frothy stuff in your yard that looks like the contents of a dog’s stomach. How to get rid of slime mold? Good question; you might also be interested in how much does a mold inspection cost.

Slime molds are in a class of their own, with over 700 different types. They are prevalent in warm, damp environments, but their appearance varies by zone. 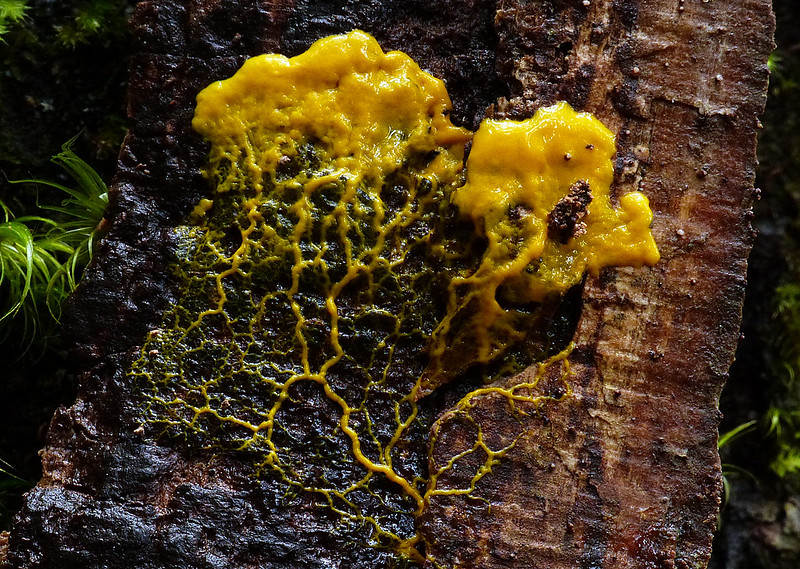 You can check out this article about what color mold is. It will be a big help in identifying molds in your home.

Slime molds are harmless to the environment and plants; hence there is no effective slime mold control. While it looks unsightly, the creature may benefit your plants by digesting diseases and germs that could harm them.

All About Slime Molds

You’ve probably seen this weird, vomit-like material in landscaping beds, vegetable gardens, or even around trees. It could be white, yellow, tan, brilliant red, or any other hue, including multi-colored. This visitor is a fungus known as slime mold, and it is not an issue, especially for larger plants.

Slime mold thrives on dead and decaying organic materials and feeds on them. It usually doesn’t hurt, isn’t dangerous to pets, and doesn’t require treatment. I’ve only seen this fungus harm plants when it grows over tiny plants and suffocates them.

There is no risk of plant harm when growing on mulch (the most usual location). Slime mold may sound frightening, but it is simply a saprophytic fungus that aids in the breakdown of organic materials, particularly in damp situations.

You can also spot it growing on damp hard surfaces. Some slime molds in turfgrasses have the appearance of cigarette ash and will leave black stains on your shoes. This fungus can also be yellow or another color.

If you want to get rid of this interesting-looking invader, any organic fungicides will do the trick. Like mushrooms and toadstools, you can eliminate slime mold with potassium bicarbonate, cornmeal, baking soda, cornmeal tea, hydrogen peroxide, or other commercial solutions.

Physical disturbances, such as mowing the lawn or scraping the slime mold in beds, can also be helpful. All of these growths are more common when there is an abundance of water and organic debris, so keep an eye on how much you water your garden.

What is a slime mold?

The slime mold organism reproduces and survives in the same way that fungi do. It can also move to some extent on its own. These facts may lead you to believe it is a fungus or an animal, but this is not the case.

The creature obtains moisture from the air and nutrients from the substrate upon which it grows, yet it is not a plant. Slime molds are primordial single-celled creatures with spore reproduction that belong to the genus Fuligo. One of the more intriguing slime mold facts is their apparent lack of resemblance to any recognized plant or animal group.

Slime molds don’t feed on plant tissues and are generally harmless to plants. A yellow mold in mulch, for example, does not affect plant development. However, some slime molds can blanket patches of turf and even coat the grass blades.

Physarum cinereum is the most common slime mold found on turfgrass, where it can live for up to two weeks. If a slime mold becomes too large and persistent, it can block photosynthesis and make the grass underneath brown.

Getting Rid Of Slime Mold

Slime mold, without a doubt, is unappealing. In the garden, anything that resembles vomit is an unsettling sight. However, because slime molds in garden mulch or other areas are not dangerous, they do not need to be removed.

As a result, chemical slime mold control is more hassle than it is worth. Few substances can permanently kill the organism, and toxic applications may even be harmful to other forms of life in the mold’s vicinity.

Slime molds grow in damp environments. Thus the best way to get rid of it is to let the area dry out. Rake slime molds out of garden mulch to expose the organism to drying air.

You can also scrape it up, but it will most likely come back. Some molds have been reported to return year after year in the exact location.

Slime molds come in various colors, but the most commonly seen form is orange to yellow in hue and resembles dog vomit. They can grow two feet (61 cm) in diameter and can be found on moist decomposing plants. Slime molds are commonly seen in garden mulch or thick grass clippings.

The creature matures in a state known as plasmodium, where it feeds on vegetation. This plasmodium survives in damp conditions and then transforms into spores when the organism dries up. As a result, the host is left with a dry crusty residue.

If you’ve ever seen one, you’ll remember it for the rest of your life. With its name-giving appearance, a slime mold is unlikely to have aesthetic attributes that complement your landscape design.

Slime molds aren’t infections that damage plants, and you won’t have to employ chemical treatments to get rid of one in your beloved flower bed. Hopefully, we have provided you with all of the required information on how to get rid of slime mold.