There are many options on who sits at the head table at a wedding. We will talk about the traditional way where it’s only the bride and groom and other approaches where some people are also included at the table.

Do you have other questions from before the wedding ceremony to the reception? Browse our blog and know things like how to run a wedding rehearsal, for example. 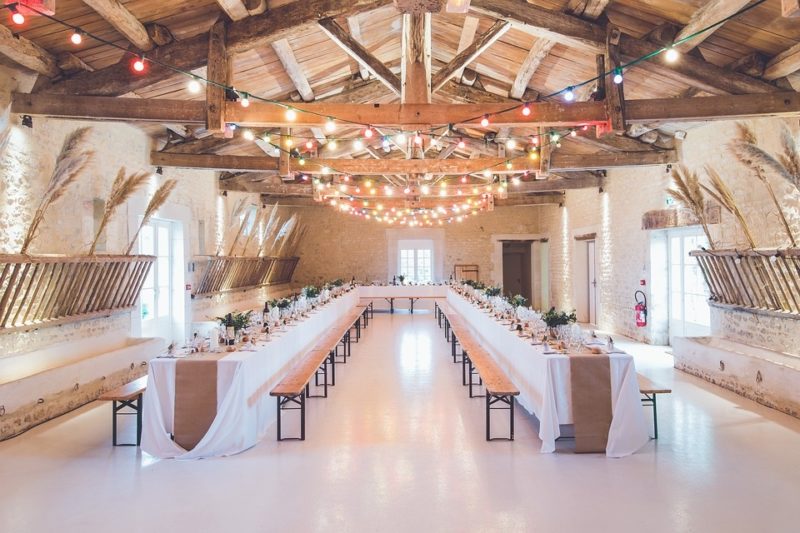 Who Normally Sits At The Head Table At A Wedding?

Traditionally, only the bride and groom sit at the head table on their wedding day to get the best focal point on the room. This is also why the head table is sometimes called the sweetheart table, which is an excellent way to have an intimate moment between the couple during a busy event where they might not have some private time.

With the best man and maid of honor

If the couple doesn’t want to be alone at the head table, they can also include their maid of honor and best man. This way, they can chat with their closest friends and spend time unwinding.

Have the entire wedding party

Some couples don’t mind a lot of company at the head table. They even include the entire wedding party as speeches and toasts are held at the table.

Where Do The Bride And Groom Sit At The Reception?

The bride and groom typically sit on the sweetheart table or head table. The choice is on the couple themselves if they want to be the only ones on the table or include their wedding party or family.

How do you decide between having a sweetheart table or a head table? The former is the better option if you want to have a more intimate moment with your spouse, but some couples may prefer to have other guests with their table to avoid feeling too isolated from the conversations.

The couple may also don’t like the feeling of being “on display” at the front, so they’ll have the maid of honor and best man at the table. Nonetheless, there are no rules on where the bride and groom should sit and who they should have at the head table.

Do Couples Sit Across Or Next To Each Other At Weddings?

The couples sit next to each other at the head table. Traditionally, the bride will sit to the groom’s right, and the head table itself is positioned facing the room.

The best man will sit next to the bride and the maid of honor next to the groom if you have them at the head table. Creating a male-female pattern is common, but this positioning is not mandatory.

Depending on the wedding reception layout, the head table can be directly opposite the band or right in the middle of the room if the dance floor is separated from the dining area. The guests should be all around the couple, and the table is perfectly centered.

What about same-sex couples? There is no rule with the positioning when same-sex newlyweds sit next to each other.

Do Parents Sit On The Head Table?

The bride and groom’s parents can sit with them at the head table. This is a great way to thank them since it’s also common for the parents to host the wedding.

Having the parents sit at the head table can also help the couple’s families mingle. However, be mindful of the existing dynamics between the families to avoid any awkward encounters.

You also don’t want to make a family member feel overlooked, so consider sticking with the immediate family only for the head table. Some families have a unique setting, so discuss planning the seats on the head table with your significant other.

Do Bridesmaids Sit At The Head Table?

The bridesmaids can also sit at the head table. Perhaps the couple wants to socialize with their guests instead of sitting only by themselves.

Some weddings will even include the groomsmen at the table to create an alternating pattern of male and female guests around the head table. So the only consideration left is to ensure that you’ll have enough space for this crowd at the table.

What if the couple’s family are already at the head table? To avoid taking too much space, it’s possible to designate another table for the wedding party close to the head table.

Read about what a wedding house party is, which refers to other close friends and family that can’t be included in the bridal party.

Was this article helpful? You just discovered who sits at the head table at a wedding, where traditionally, it’s only the newlyweds.

However, they can also have the maid of honor and best man, or even the entire wedding party. Another option is to have their parents with them as well.

We hope this gave you an idea of your wedding layout; leave us a question if you have any.