The answer to who holds the rings in a wedding is the ring bearer from his title itself. We will talk about the expectations of selecting a ring bearer and also his tasks during the ceremony.

You will also find out who holds the rings before the ceremony. Do you have more questions regarding the rings at the wedding? 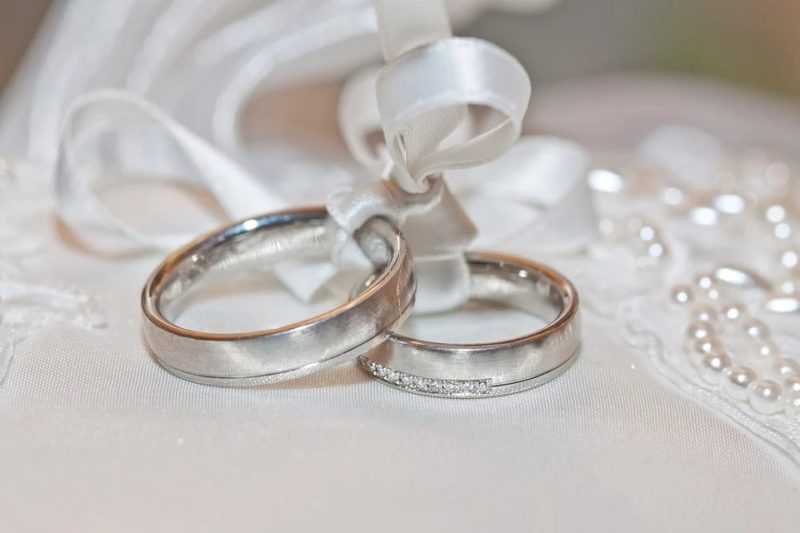 Feel free to browse our blog and learn information like who buys the wedding bands and more.

Who Usually Holds The Rings In A Wedding?

However, the ring bearer is not as crucial as other ceremony members like the officiant or witnesses required for the wedding to be legal. The ring bearer only carries or delivers the rings to the best man or wedding officiant, and some weddings even modify this part of the ceremony.

For example, some ring bearers are too young to walk independently, and an adult will carry him down the aisle. Some weddings also partner the ring bearer with the other young child at the ceremony, the flower girl.

Who should hold the wedding rings before the ceremony?

The best man usually holds the wedding bands before the ceremony. However, the couple can select anyone they trust in the wedding party, including the maid of honor as well.

The couple can decide if the ring bearer must carry the actual rings during the wedding ceremony. For very young kids, it’s acceptable to put fake rings on the pillow or box that the ring bearer holds.

What should the ring bearer carry down the aisle?

Traditionally, the ring bearer has the rings resting on his hands. But nowadays, and for added safety, especially for young kids, the rings can be in a box or pillow.

More and more couples are also breaking some customs to make their wedding more unique and closer to their personalities. For example, the ring bearer can carry the ring over an item related to how the couple met.

And while young kids are often tasked with fake rings, you can add humor to the ceremony by having the ring bearer hold a banner. It can mention that he’s looking for the rings and other witty phrases.

Who Should Be Your Ring Bearer?

The bride and groom can choose to follow tradition and select the son of their close friend and family. He can be the son of the best man, maid of honor, or if you’re looking how to include nieces and nephews in a wedding, then he can be your sibling’s child.

Much like the rest of the wedding party, it would be great if the ring bearer was someone close to the couple themselves. Some blended families even consider their young child to be the ring bearer on the ceremony.

You don’t have to be limited with the male children of your close friends and family. No rule inhibits you from considering a young girl as your ring bearer.

However, there would be some modifications, depending on having a girl or boy ring bearer. For example, it would be more suitable for the boy ring bearer to stand on the groom’s side, while a girl ring bearer should stand next to the bridesmaids.

Can my dog be my ring bearer?

Couples that are especially fond of their dog even sometimes include him in their ceremony. But because it’s also risky to have a pet hold the wedding rings, they will likely carry fake ones.

Depending on your dog’s demeanor, he can carry the rings on the aisle himself tied on his collar or in the bag or basket he’s holding. If someone is holding his leash, it will be the factor on which side he should stay put during the ceremony.

When it comes to who gets to be the ring bearer, he is usually the youngest member of the wedding party at under eight years old. However, there is no age limit for a ring bearer.

If you chose a child older than eight years old, no rule disqualifies him for the role. Some couples even opt for an adult as their ring bearer for a fun and quirky wedding.

After all, more and more weddings choose a close male friend who is expected to be part of the groomsmen as their “flower girl.” With modifications like this common nowadays, you don’t have to stick to the age limit that’s traditionally set for a ring bearer.

And that’s it! We just found out who holds the rings in a wedding, and it is the ring bearer.

Traditionally, he’s a boy under eight years old and can be the son of someone close to the couple. However, you can break the customs regarding his gender and age as with modern weddings.

He will hold fake rings for added peace of mind, while the best man keeps the real ones before the ceremony.