The answer to who gets a boutonniere at a wedding includes important male guests. However, we will also compare tradition and modernity when it comes to boutonniere etiquette.

You don’t need to follow the customs of giving boutonniere to close male guests, but it would be helpful to be familiar with it. For additional discussion, read who gets flowers at a wedding. 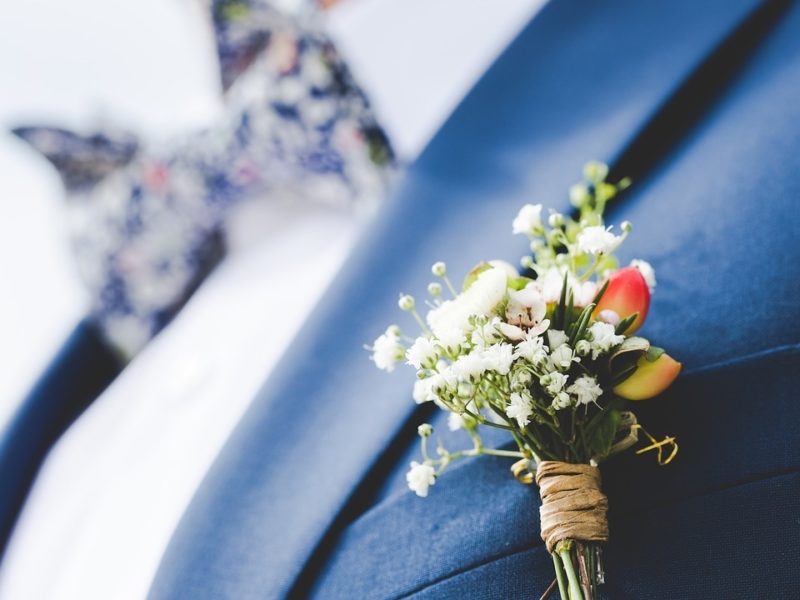 There are different flower arrangements in a wedding, so learn which kind is suitable for the guest.

How To Know Who Gets A Boutonniere At A Wedding

Traditionally, important male guests like the fathers and grandfathers of the bride and groom will have a boutonniere. The groom and groomsmen can also wear a boutonniere at a wedding.

In other weddings, the ring bearer, ushers, readers, and other male performers on the program will also get a boutonniere. However, the choice of who gets a boutonniere at the wedding is still on the bride and groom.

It might be better only to give the boutonnieres at the wedding party to avoid accidentally overlooking someone close and hurting their feelings. Flower arrangements like the boutonniere can even be entirely optional, especially for non-traditional weddings.

Does Father Of The Bride And Groom Get Boutonniere?

The father of the bride and groom are expected to get a boutonniere, especially if you’re doing a traditional wedding. This rule also includes the stepfathers and grandfathers of the couple.

Much like when giving corsages to the mothers of the bride and groom, presenting the corsages to the fathers is also among the pictures taken by the wedding photographer. Then, the couple will help fasten the boutonnieres on their fathers’ lapel.

Do Grooms Have To Wear A Boutonniere?

The grooms usually wear a boutonniere on his left lapel. This flower arrangement usually complements the bride’s bouquet.

It’s also typical for the groomsmen to each wear a boutonniere. However, they would be different from the one on the groom and complement the groom’s boutonniere.

Is it a must for the groom to wear a boutonniere? The decision is on the couple, considering most weddings break some customs here and there.

Nowadays, it’s acceptable if the groom prefers not to wear a boutonniere. However, it might be more pleasing to the eyes, especially in the photos if both the bride and groom have flowers that complement each other.

What’s The Point Of A Boutonniere?

The history of the boutonniere dates back to the 19th century. During this period, flowers were added to the lapel of coats since the inside of the buttonhole tends to show.

Adorning clothes with flowers also roots from the belief that they help rid evil spirits and bad luck. This is why wearing flowers has become famous for occasions like weddings.

Finally, wearing a boutonniere helps distinguish essential guests from the rest. The groom also wears one on his left lapel to complement his bride’s bouquet.

Since the corsage is typically the female’s flower arrangement equivalent to the male’s boutonniere, consider learning who wears corsages at a wedding.

What Do You Do With A Boutonniere After A Wedding?

Keep the boutonniere inside the container for about three weeks before removal. The flower should be dry but with color still intact.

Some people also select the flowers from the boutonniere and dip them in the wax. With this, be careful not to use very hot wax as it might cause wilting.

You can deconstruct the boutonniere and repurpose the flowers and other materials for crafts. Perhaps you’re making a scrapbook, or you want to decorate some gifts and greeting cards.

You can also dry and press the flowers for other arts and projects. For example, dried flowers can be pressed in glass for decor.

Having your bouquet and other wedding flowers dried and pressed in glass is a beautiful way to display or use resin to make keychains and jewelry. You can read about what to do with a dried wedding bouquet for more flower ideas.

Does Groom Boutonniere Have To Match Bridal Bouquet?

It would be best if the groom’s boutonniere matched the bride’s bouquet. Their pairing would also be more pleasant-looking not just during the ceremony but also in photos.

Expect that the florist will use the bridal bouquet’s primary flowers when making the groom’s boutonniere. Then, the groom himself can choose the boutonniere style for his father and groomsmen.

The groom can also talk with the florist, so his style can reflect more with his boutonniere. While it complements the bridal bouquet, he still has the final say on what he wants his boutonniere would look like.

How Much Do Boutonnieres Cost For A Wedding?

And that’s it! We found out who gets a boutonniere at a wedding, which traditionally includes the fathers, groomsmen, and other male guests that the couple choose.

However, it’s not a requirement for all weddings just because it’s part of the tradition. The decision to give your important guests flowers is still yours.