If you’re curious about what is a shotgun wedding, no firearms are involved. It only refers to a forced marriage between the pregnant woman and the unborn child’s father.

We’ll discuss more why it’s called a shotgun wedding and if shotgun marriages are still a thing. Feel free also to browse our blog for discussions regarding non-traditional weddings. 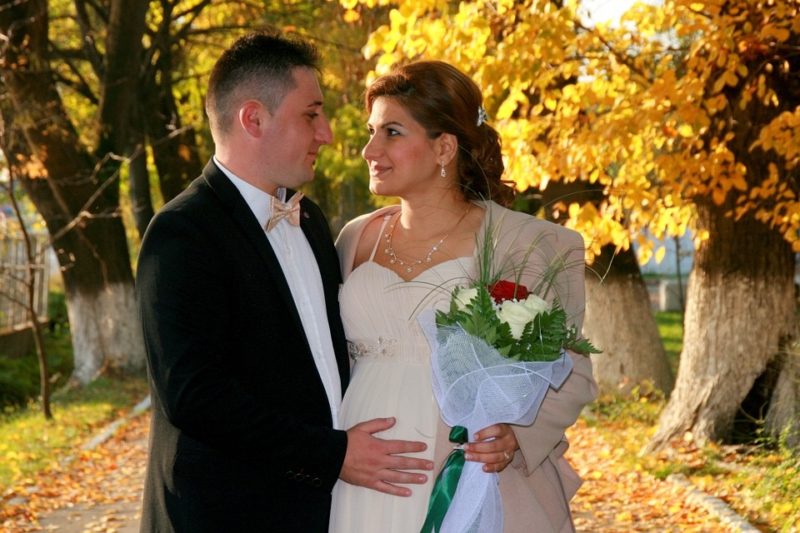 For example, what is a spiritual wedding?

What Does A Shotgun Wedding Mean?

A shotgun wedding is an informal term used in the US when a couple is forced into a wedding because the woman becomes pregnant out of wedlock. This is practiced so she won’t give birth without a husband and avoid the burden of potential financial issues.

Shotgun weddings are still a thing, although they are no longer as popular as before. Nowadays, premarital sex and having a baby out of wedlock are becoming more popular, which affects the decline of shotgun marriages.

By the 2000s, only 6% of pregnant women decided to get married before giving birth. However, certain groups of women, typically those with less education and those who got pregnant young, still experience a shotgun wedding.

Why should you have a shotgun wedding?

This can be traced back to the belief that the child will have a better life with married parents. That being said, having a shotgun marriage shouldn’t be decided without careful thinking as more research proves that children will be better with married parents who don’t divorce.

Even if you get married for the security of having a husband and financial support, there’s still a risk of having an unstable relationship as you are forced into this wedding. With these various considerations, shotgun weddings are less popular but still occur in specific demographics.

How do you do a shotgun wedding?

The bride-to-be’s family usually arranges the shotgun wedding, and they might even prepare paperwork to ensure the father’s legal obligation to the woman and unborn child. That being said, who pays for a shotgun wedding?

In most weddings, the bride’s family pays for most expenses. But since a shotgun wedding is unplanned, there’s no clear answer on who must pay for it.

Do you need financial help with your wedding? Read how to ask parents for money for wedding.

Where Did The Phrase Shotgun Wedding Come From?

The term “shotgun wedding” is thought to started in the 1700s or 1800s. It is so-called because the fathers and brothers of the pregnant women supposedly used shotguns or firearms to force the suspecting man who got her pregnant to marry her.

While there’s no conclusive evidence, it was even believed that the woman’s male family members also followed the man to the altar with firearms pointed at him to ensure he won’t bail. One can only imagine that because a shotgun wedding is a forced marriage, it feels like you are doing it out of fear from a firearm pointed at you.

What percent of marriages are shotgun?

Analyses and researches suggest that the percentage of shotgun marriages drop to a single digit. Because of various influences and beliefs, couples nowadays are more likely to live together despite having a child than rushing into a marriage.

While most children are still birthed to married parents, a study found out that a typical reaction to an unexpected pregnancy is living together compared to years ago when they’d be forced into a shotgun wedding. Another study even suggests a higher percentage of first-time mothers living with the baby’s father than first-time mothers marrying the father because they found out they’re pregnant.

The non-conforming influence of media is believed to influence this decline in shotgun marriages. Even so, it’s worth noting shotgun weddings are on the rise in groups with low marriage rates, and they even appear to be long-lasting in comparison with couples who have a wedding without being pregnant.

What Do You Call A Shotgun Wedding?

The phrase “shotgun wedding” is primarily used in the US, but it has other terms that bear the same meaning throughout the world. It’s usually practiced, especially in conservative regions where premarital sex or even getting pregnant out of wedlock is considered taboo or embarrassing.

In Europe, there are so-called knobstick weddings where the pregnant single woman and the child’s father are forced into marriage. The term came from the office staves carried by churchwardens present in the ceremony.

In countries like the Philippines, there is a tradition similar to a shotgun wedding called “pikot.” The baby’s father is also forced to marry the pregnant woman for financial security, and weapons or litigation are sometimes used to ensure his compliance.

And that’s it! To recap what is a shotgun wedding, it’s a forced marriage between the believed father of a pregnant woman.

It is so-called because it’s believed that the man is forced to comply with firearms pointed at him. Nowadays, shotgun weddings still happen, although it’s more common for couples to live together after an unexpected pregnancy.