Feel free also to browse our blog for other discussions and guides regarding Indian weddings. For example, do you know what to wear to an Indian wedding? 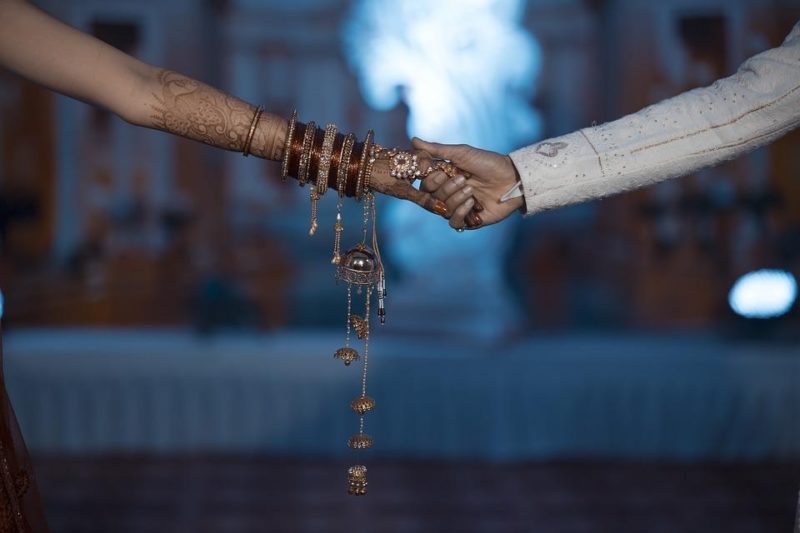 Exactly What Is A Sangeet In An Indian Wedding

The Sangeet ceremony is the celebratory part of an Indian wedding that can be described as a musical night. Expect a lavish and lively celebration with music that also acts as a way for the groom and bride’s family to bond.

Most Indian communities practice the Sangeet Indian wedding, but it’s more common in Punjabis and Gujaratis. The former include Bhangra and Gidda songs, while the latter may have the Garba, where women dance and clap with music.

Please note that the Sangeet is a pre-wedding event and is often a way to relax and have fun from all the wedding preparations. Back then, only the females from the bride and groom’s families participated, but nowadays, even men can join the Sangeet.

What Happens In An Indian Sangeet?

Describing a Sangeet Indian wedding has female members from both the bride and groom’s family sing songs about the couple. This is more common in Punjabi culture, but it’s practiced at most Indian weddings.

The family elders typically choose songs about having a successful marriage or even good-natured ones, teasing the bride. And since the Sangeet is a pre-wedding event, it becomes a way for the couple’s families to get to know each other before the big day.

You can also attend a Sangeet where the bride and groom’s friends and relatives perform choreographed dances. Overall, it’s a lively event where the two families connect and socialize while showing their joy about the couple’s upcoming union.

Sangeet ceremony then vs now

Back then, what happened in a Sangeet ceremony included the singing of songs talking about marriage or even teasing the bride. It is also usually participated by women or the bride’s family, in particular.

A Sangeet ceremony nowadays can be joined even by men and it’s not limited to songs. In fact, some are extravagant that management companies are booked to provide choreographies and performances.

Overall, planning a Sangeet can also be fun because you can try different ideas and get creative with what to do. The primary purpose is to alleviate the tension and stress with all the wedding responsibilities, so the sky is the limit when you’re trying to come up with what to do for the Sangeet ceremony.

What Is The Purpose Of A Sangeet?

The Sangeet ceremony at an Indian wedding is traditionally practiced in most North Indian ceremonies but now is also featured in Bengali and South Indian weddings; it is a way to let loose before the wedding. It can also help the bride and groom’s families get to know each other and celebrate the couple’s union.

The event is proof that socializing is valued at Indian weddings. But ultimately, the Sangeet was even practiced to alleviate the seriousness of the preparations for the big day.

It could last for ten days until the wedding, but now, the Sangeet is celebrated for one day, usually two to three days before the wedding. To commemorate the bond of the two families, it can take place at the bride’s home to welcome the groom’s family.

Are you also curious about the Desi culture and how they have a ceremony? Read what is a Desi wedding to know more.

What Is The Difference Between Sangeet And Mehndi?

There are two events that happen before an Indian wedding ceremony: the Sangeet and Mehndi. You can differentiate the two where the Sangeet ceremony is an event that happens two or three days before the wedding, where everyone sings songs and celebrate.

It is a lively event where the families can also meet and talk. Dances and songs are performed, and even dishes are enjoyed.

The Mehndi, on the other hand, is the ceremony that happens before the wedding ceremony and focuses on the bride. Turmeric paste or henna is applied to the bride’s feet, hands, and face. It represents beautifying the bride and believed that the darker the stain, the more love the bride would receive from the groom and her in-laws.

How Long Is A Sangeet?

Different elements happen during the Sangeet ceremony, so giving a specific duration would not be easy. However, expect dance performances by the relatives, guests enjoying food, drinks, henna, and even an open dance floor after.

Who Dances At A Sangeet?

The relatives and friends of the bride and groom typically perform choreographed dances in the Sangeet. The performances can last for about two minutes each and end with the couple dancing.

And that’s it! To recap what is a Sangeet in an Indian wedding, it refers to an event before the wedding where women participate in lively songs teasing the bride and talking about marriage.

It is now practiced with dances, and even men can join in the Sangeet performances. Because of its upbeat tone, the Sangeet is a way to alleviate the seriousness of all the wedding planning, and it also provides a chance for the couple’s family to bond.