Below, we will discuss what else to expect with this men’s baby shower. And for comparison, you might also like to read what is a baby shower. 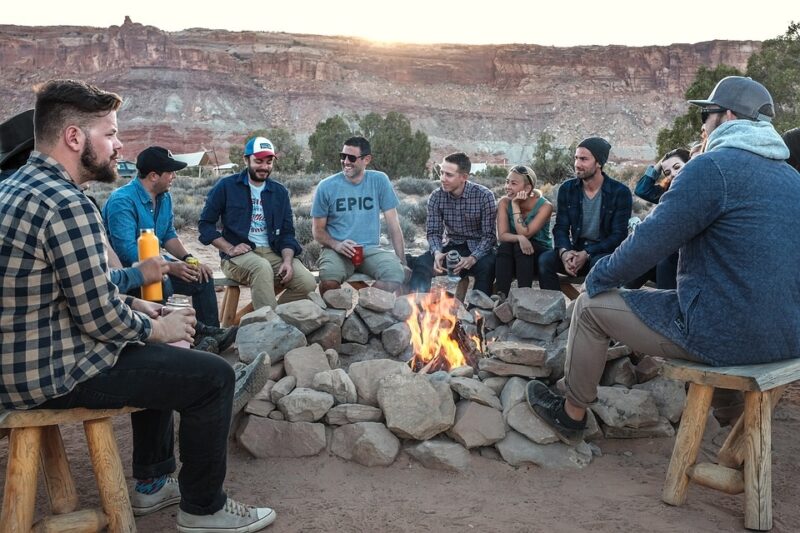 But nowadays, it’s more common for expecting parents to have a co-ed baby shower to which guests of any gender are invited. This way, everyone who wants to show their love and support to the parents-to-be can join the event, and both parents feel equally honored.

Who Should You Invite For The Diaper Party?

The diaper party is a male-exclusive baby shower, so the male family and friends of the expecting dad should be invited. Remember to send their invitations on time and indicate that you’re throwing this type of baby shower.

Clarify that it’s a diaper party, and only men are invited. Otherwise, it’s a co-ed baby shower where guests of any gender can attend.

Remember to run the guest list with the dad-to-be so he can see the people attending the baby shower. Be realistic with the guest size, and keep your diaper party budget in mind.

And as for the etiquette of guest attire, why not read what to wear to a baby shower men?

Why Have A Diaper Party?

There are many reasons why some dad-to-bes want diaper parties separate from the baby shower. Some people might feel awkward talking about babies and discussing parenting matters if other genders are present.

Some couples value their individuality and prefer separate baby showers. Furthermore, it’s also an opportunity to catch up with family and friends without the pressure of accommodating other people whom the dad may not be close to.

He won’t feel overwhelmed, especially if the dad-to-be is an introvert and would prefer to socialize at intimate diaper parties. And finally, the dad-to-be and other men close to the expecting couple might want an exclusive baby shower with beer and baby shower games that might feel awkward with certain guests.

Who Hosts A Diaper Party?

Like traditional baby showers, diaper parties are hosted by any close male relative or friend of the expecting dad. It can be his dad, father-in-law, brother, or best mate.

However, no one’s obligated to host any baby shower. Nowadays, it’s acceptable to throw your own baby shower if no one is hosting.

You can always indicate in your invitations that it’s an exclusive event for men. But as couples, it’s best to discuss the baby shower with your partner as it might be more convenient to throw a co-ed diaper party.

What Do You Do At A Diaper Shower?

Diaper parties have similar activities to other baby showers. But of course, the baby shower games, theme, and food are something that men will enjoy.

For example, the party can be modified into a bbq instead of a typical brunch or tea party baby shower. Instead of champagne, the host can serve beer to the guests.

The game can be similar to other party ideas, but they can be more hilarious since the participants are men. But more than having fun, remember that the diaper party is done to celebrate and show your support to the expecting dad.

What games can guys play at a baby shower?

There are many fun party games that guys can play at the diaper party.

When Did Diaper Parties Become Popular?

It was around 2011 when diaper parties became trendy, and dads began having their own baby showers. This is not surprising since dads nowadays are more involved and enthusiastic about parenting than in the past years when such a role was only expected for moms.

Was this discussion helpful? You just learned what is a pamper party baby shower, which is a baby shower exclusive for men.

It’s celebrated to honor the expecting dad, as men are often left out with traditional baby showers that only invite female guests and have the mom as the guest of honor. But if both parents want a shower, a co-ed shower honors both parents, and all genders attend.