The answer to what finger does a gay wedding ring go on reveals two things. First, some sources give the couple a choice of where to put their wedding rings.

Contents show
1 What Finger Does A Gay Wedding Ring Go On: Meanings And More
1.1 Right ring finger
1.2 Do what feels right for you
2 Why Do Gay Guys Wear Wedding Bands?
3 Do Gay Guys Wear Engagement Rings?
4 What Does It Mean To Wear A Wedding Ring On Your Right Hand?
5 Who Gets The Ring In A Gay Engagement?
6 What Does It Mean When A Man Wears A Ring On His Middle Finger?
7 Conclusion

However, a publication also showed how it’s common for gay marriages to wear wedding bands on the couple’s right ring finger instead of the traditional left ring finger. Continue reading below to know more. 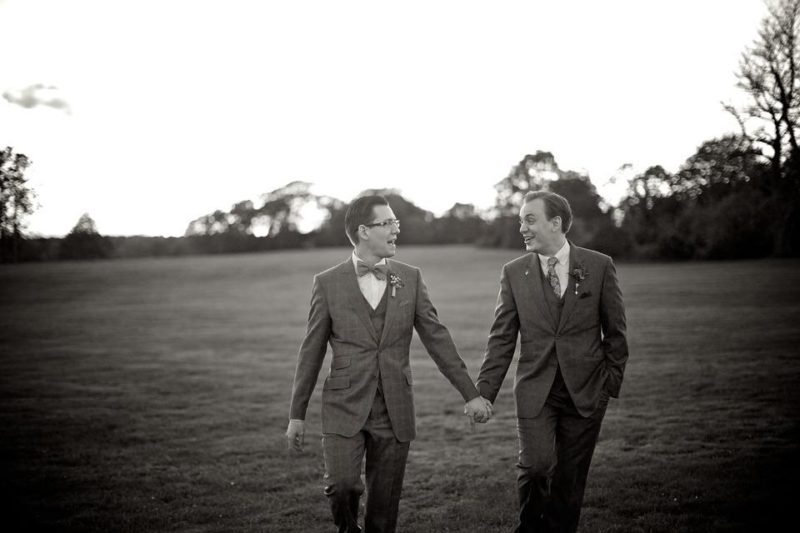 And for those curious about the wearing habits of different people, feel free to browse our blog for various discussions. For example, do you know why guys don’t wear wedding rings?

What Finger Does A Gay Wedding Ring Go On: Meanings And More

Traditionally, the wedding rings go on the left hand’s ring finger. This marriage custom is from the romantic belief regarding the vena amoris or the vein that went from this finger to the heart.

But according to the publication of the University of Washington School of Law, the gay and the lesbian community in the USA typically wear their commitment rings on the ring finger of the right hand. So what could be the reason for this switching hands for the wedding ring?

Some gay couples wear the wedding ring on the right ring finger instead of the left as a way to protest against the laws that oppose legal gay marriages. In addition, the non-traditional placement of the ring can help raise awareness of unequal treatment.

Another reason for having the gay wedding ring on the right ring finger is to show the world that the wearers view their same-sex relationship as different from a heterosexual relationship. And finally, it’s an expression of commitment privately.

The wedding ring on the right ring finger will only be recognized by those who know its significance. And while it symbolizes commitment, they risk having fewer questions about their spouse.

Do what feels right for you

Other references do not indicate where gay wedding bands should be going. It can be on the ring finger of any hand, whichever works for you and your partner.

Some gay couples choose the traditional left ring finger, while others wear the rings on their right ring finger to symbolize the difference between a heterosexual relationship. You might also find other gay couples where they opt for the same but non-ring finger or the same rings but worn on different fingers.

It’s even possible to omit the wedding rings and wear other symbols of commitment. This diversity of expression can be related to the variegated community as well.

Gay men wear wedding rings to symbolize their commitment to each other similar to how wedding bands are the symbol of marriage. It can also be interpreted as a way to promote equality and fight for their rights, especially with the limitations regarding gay marriage in different places.

Wedding jewelry as symbols is not limited to any gender. Gay men can choose to wear or not to wear engagement rings.

Like everyone else, you can choose which finger your engagement ring will go. You can also stack it on the same finger with the wedding band.

For ideas on wearing these two iconic commitment symbols, please read which order do you wear engagement, wedding, and eternity rings.

What Does It Mean To Wear A Wedding Ring On Your Right Hand?

The wedding ring is usually worn on the right ring finger in a gay or lesbian marriage to symbolize their difference from a heterosexual marriage and also as a way to protest for legal rights. In states that legalized same-sex marriages, the right-handed ring can also show other people that the person is in a monogamous relationship.

People in open relationships also sometimes wear the wedding ring on their right hand to show commitment. But because it’s on the right and not the traditional left ring finger placement, it is a marker for their open relationship setup.

Who Gets The Ring In A Gay Engagement?

There are no rules on who should get the ring in a gay engagement. Instead, discuss this with your partner to know what both of you want.

Sometimes, both people will wear matching engagement rings. However, in some relationships, only one person will wear it, depending on their agreement.

What Does It Mean When A Man Wears A Ring On His Middle Finger?

Wearing a ring on the middle finger can be a way to catch attention because of the unconventional placement. However, it symbolizes balance or simply a style that shows sophistication and edge.

When it comes to men’s jewelry, there is no right or wrong way to wear rings.

And that’s it! To recap what finger does a gay wedding ring go on, it’s usually on the right ring finger to promote equality and portray difference from a traditional relationship.

However, it’s worth noting that some sources also mentioned that gay couples could wear their wedding bands on whichever finger they like. So leave us a comment below on where you wear your wedding ring.