Ginger is a powerful ingredient. The medical effects of ginger root are among the most lucrative anywhere in the world. Its health benefits are based on its namesake  — “wonder spice” — with its uses in the kitchen and for its health, treating nausea, relieving muscle cramps, and more.

If you ask about the medical effects of ginger root, then they can be listed as being an ideal remedy for morning sickness, muscle pain, osteoarthritis, indigestion, and blood sugar problems. 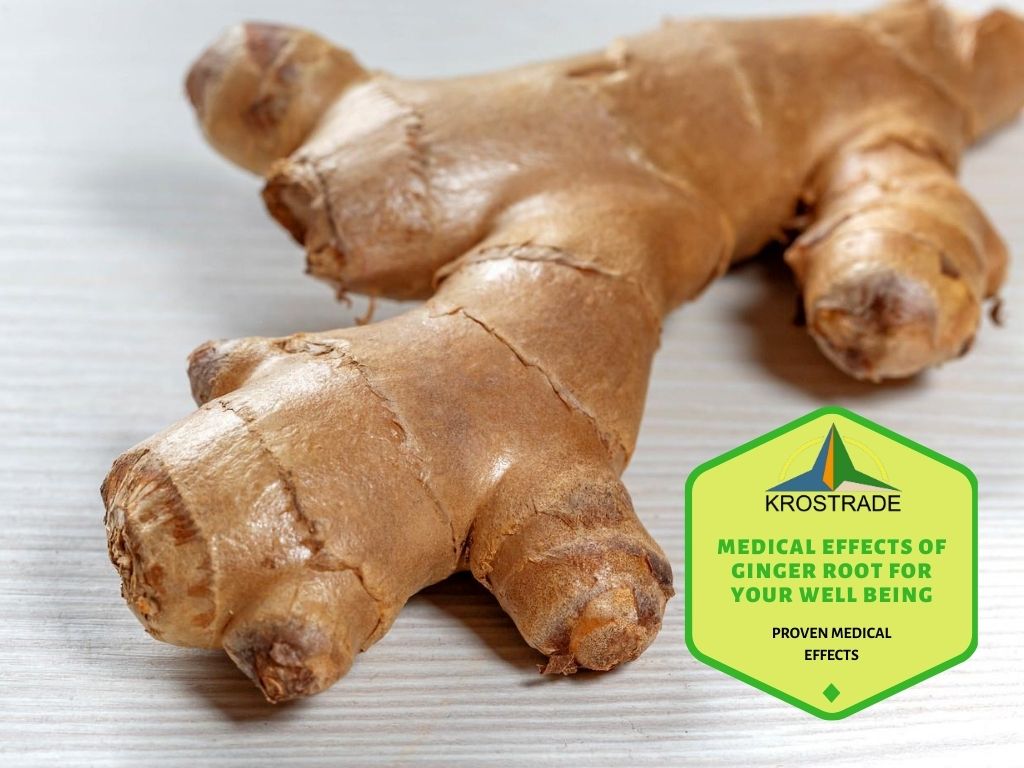 It contains gingerol, a potent compound that contributes in treating indigestion, reducing menstrual pain, and fighting viral infections such as COVID-19.

Over around four centuries ago, the book “Rodale’s Encyclopedia Of Herbs” had Greek bakers turning gingerbread from this plant, from ginger imported from the Eastern part of the world. In the 16th century, the Spanish were already cultivating ginger, before the colonizers took them to the New Word.

Few years before the First World War, Great Britain was already importing more than five million pounds of ginger root. The origins of ginger is uncertain, but it is said to have originated in the southern regions of China and in South Asia, India, in particular. There was a moment in history when the crop was introduced to Florida state.

For several millennia, naturopathic healers and experts from Arabia, India, and most parts of Asia have utilized ginger as an ingredient in the kitchen, producing a healthy diet. Plus, it also offers the medical benefits. One of the basic parts of the crop is the ginger root.

Ginger, as a root crop, finds itself belonging in the family of cardamom and turmeric, effectively utilized to relieve the person of vomiting and nausea due to fever and motion sickness while traveling.

The Spice Trade has even expanded the way ginger is exported and imported across the globe. There was even a physician in the 1700s who wrote, “Ginger does good for a bad stomach.” For this 19th century physician Robert Thornton, two or three cups of ginger for breakfast are relieving the body of dyspepsia brought by hard alcohol drinking.

1. Ginger Is Ideal For Morning Sickness

One of the finest medical effects of ginger root is treating morning sickness. The root crop has been proven effective to combat nausea. For instance, studies have revealed that prescribing ginger for nausea and vomiting is tried and tested effective. One of its uses for the body is right after undergoing into a surgical operation.

Both traditional and alternative medicine have ginger for its ability to improve digestion, combat nausea, and aid the patient during common colds and flu. It can be used as fresh, dried, or powdered juices, and may also be added to cosmetics and processed foods. It is also a common ingredient in various recipes.

The unique scent and flavor of this root crop emerge from its oils, and one of these is gingerol. Touted as a bioactive compound distinctive in ginger crops, gingerol provides antioxidant benefits and anti-inflammatory advantages for well-being.

It has been found that ginger root is proven effective against muscle pain that happens after the exercise, or hard training. Taking two grams of ginger per day for 11 days may reduce muscle pain among patients performing exercises in their elbows.

While it does not offer immediate effects for these conditions, they have anti-inflammatory properties that could reduce the muscle pain.

4. It Helps In Treating Osteoarthritis

Osteoarthritis is a health condition in geriatrics, but it can hit almost anyone at any given time. It involves the weakening of the body’s joints, leading to signs like stiffness and pain.

Taking ginger extracts can minimize the pain, and can supplement the current medication you take. Combining ginger with sesame oil and cinnamon may reduce the stress related to osteoarthritis when topically applied.

5. It Helps In Lowering Blood Sugar And Improving Heart Health

The anti-diabetic capacities of ginger cannot be discounted. Adding ginger to your daily diet will regular blood sugar levels, and reduce your risk for cardiovascular diseases.

Heart attack is one of the leading causes of death among individuals.

There is no stopping the foodie if they want to indulge in food, but at the end of the road, chronic indigestion may happen. It is painful and can be uncomfortable in the upper portion of the stomach area.

Ginger’s anti-inflammatory properties for digestion are among the most interesting health benefits it has. It improves digestion, and prevents dyspepsia and indigestion.

In herbal healing, menstrual pain may consume a woman’s poise. Ginger is the best way to go because of its properties for relieving pain, as effective as popular painkillers such as ibuprofen and mefenamic acid.

The chemical gingerol found from the root crop provides medical effects in fighting infections. Extract from the root can prevent the growth of bacteria linked to inflammatory diseases and viruses, including the coronavirus.

There are instances when people want to combine ginger with other compounds. While it is generally safe, take note of these warnings:

You will never know the negative effects of combining ginger with any of these above. For instance, you are taking a medication for diabetes, while the doctor is not around, you may stay away from ginger root formulation for now.

The root crop is loaded with vitamins and minerals for nutrition. These are one of the medical effects of ginger root, when used in the kitchen. In the next parts of the post, you will learn more about its uses for cooking. But for now, follow these dietary guidelines for a healthier you.

Begin the day with a warm cup of tea ginger, and there is the option to add milk. It is a great idea likewise to find out if sugar will be recommended for health. Apparently, the most exotic additions are cardamom and cinnamon. For curries and stews, ginger paste will work best.

Soups with ginger or hot broths with the ginger root are soothing fever reliefs. Spices you can add in the soup are garlic, black pepper, and broth flavors. A recipe on carrot-ginger soup is also a perfect option.

Dried ginger powder can be made by mixing a tablespoon of boiled water with the ginger, and best to consume each morning. You can also turn your ginger into detox beverages, fruit juices, and more.

You are very familiar with lemon water, and drinking ginger water does magic for your health. As you have learned, ginger makes a perfect herbal medicine for better cardiovascular health, improving the functions of the heart.

Ginger water is a recipe you can do with this beneficial root crop. With ginger water, your body gets the hydration it needs. You can even collect the water in your workout tumbler to bring to your gym.

The advantages of ginger water is important because hydration can support various aspects of your health. Drinking adequate glasses of water each day will do more than what you can imagine. Start each morning with water infused with ginger, and see changes upon your health.

First, here are the basic preparation tips for your ginger, so you can enjoy the medical effects of ginger root.

The most natural way to cultivate ginger is in the farm. But without resources or if you are living in the capital cities, the option is to build greenhouses. Growing ginger in greenhouses to realize the medical effects of ginger root is easy.

It’s been said that cultivating and growing ginger is comparable to taking good care of potatoes. The ideal cut is at four-inch pieces, ensuring that each of these pieces have at least an “eye” or node. During late March, ginger roots are planted densely in customized soil mixture called “nursery crates.”

These are placed in germination chambers in greenhouses, maintained at 80 degrees Fahrenheit. From this point on, heat is added, but during the spring and summer, the heat source may come from the Sun.

Ginger should be managed carefully. Once the ginger shoots start to show up, be sure to soak this on a daily basis. Fertilization of every other week is crucial. Like potatoes, ginger responds to the hiling processes.