The answer to Korean wedding traditions who pays is similar to other weddings. The bride and groom’s parents in Korea will pay for the marriage costs.

We will also discuss what to expect from Koreans and their wedding customs, such as the dowry, how much you should give as a guest, and what traditions happen at a typical Korean wedding. And for other wedding tradition costs, feel free to browse our blog for different cultures. 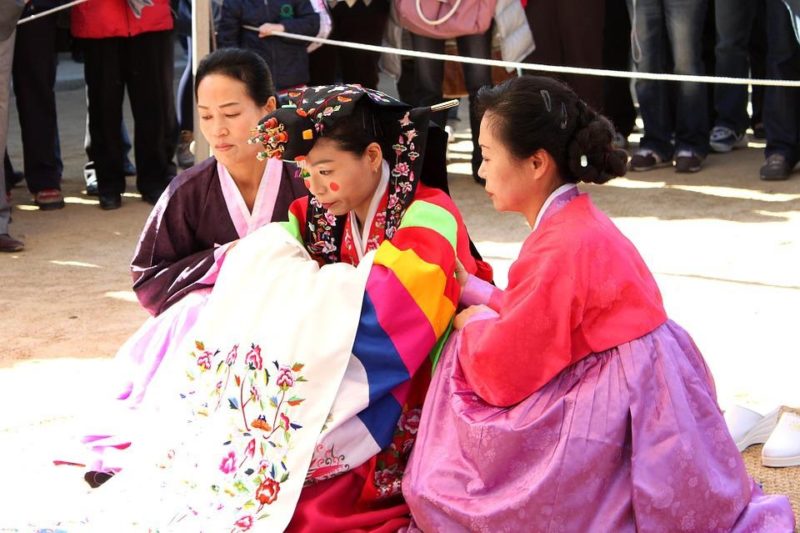 Everything To Know About: Korean Wedding Traditions Who Pays

Both sets of parents will share and pay the costs of a Korean wedding. This means the bride and groom’s parents will split the wedding expenses according to tradition.

This is similar to other marriages and traditions where the couple’s families will help them with the wedding budget. However, it’s a typical wedding tradition for the bride’s parents to pay higher for the wedding.

In a Korean wedding, the parents will share the costs and even typically invite the guests themselves. But nowadays, younger generations may not follow this Korean wedding tradition.

Some Korean couples may prefer a more intimate ceremony with fewer guests. Therefore, they invite the guests they want since they’ll pay for the wedding themselves.

What Is A Korean Wedding Dowry?

Do you know the elaborate gift system for wedding ceremonies in Korea? According to the National Folk Museum of Korea, the groom’s family will send a marriage proposal letter and gifts to the bride’s family several days before the wedding.

A chest containing gifts made from silk items is given, and it also includes grains representing prosperity, protection from evil spirits, wishes for the bride, and a long, happy married life. There is also incense to repel wicked spirits and tea leaves to wish for a faithful bride.

Some references mentioned another Korean wedding custom where the groom will bow twice and present a wild goose to his bride’s mother during the Jeonanrye ceremony. Nowadays, the wild goose is replaced by a wooden goose.

It is a symbolic tradition in Korean marriage ceremonies because it represents the groom’s promise of loving and caring for the woman’s daughter.

How Much Money Do You Give At A Korean Wedding?

If you’re invited to Korean wedding ceremonies, it would be best to know the etiquette and expectations regarding gift-giving in Korean weddings and marriages. For example, how much should you pay for your wedding gift for a Korean marriage ceremony?

According to The Soul of Seoul, the amount of money to pay for your gift depends on your closeness with the family. You can give between W50,000 to W100,000 if you’re close or W30,000 to W50,000 if you’re attending a colleague’s or acquaintance’s wedding.

How Much Money Do I Need For A Korean Wedding?

The average South Korean wedding costs 230 million South Korean won, according to data from 2018. This is a sizeable amount because it includes the expenses for the newlywed’s house.

Overall, every couple is different, and you can make your wedding as traditional or as modern as you want. But if you want to embrace your Korean wedding traditions, then do not be surprised by the sizable budget needed compared to Western weddings.

If your budget is limited, consider reading our blog on how to have the cheapest wedding possible.

How Do The Traditional Korean Weddings Work?

The mothers of the bride and groom will light candles to invite the God of Heaven to the marriage. They will also bow to each other as a sign of respect.

The bride will walk down the aisle with her attendant and then stand next to the groom. Then, during the Kwan-se Rye, they will face each other and take turns as they bow deeply with palms to the floor.

Before the ceremony, the bride and groom wash their hands to represent cleansing the mind and body. And during the Hap-geun Rye, they will pledge their faithfulness to each other before raising a cup of wine to the sky.

The final part of the ceremony is where the couple will face their guests and bow deeply to the ground.

And that’s it! You just learned about Korean wedding traditions who pays, which is usually split by the set of parents of the bride and groom.

However, modern Korean weddings nowadays have a different take where the couple can choose to pay for the wedding themselves. Let us know below if you have any wedding traditions you’re interested to know about.

Last Updated on 3 weeks by Igor