When learning how to train cucumbers, differentiate the methods for the greenhouse and the garden. Growing cucumbers in the greenhouse are advantageous for training them, and the stable conditions also prevent drawbacks in their development. But if you want to grow them outdoors, training them to grow vertically is equally beneficial.

More so, vertical training is not only useful for saving space, but it also allows gardeners to grow cucumbers for slicing and pickling. The skill of training cucumbers will always help create both a neater and a productive garden. You’ll also find that not having them tangled prevents problems and diseases.

How To Train Cucumbers: Growing Cucumbers Vertically At The Greenhouse And Garden

When one says training cucumbers, it can pertain to using a trellis, string, or stake. After the seedlings emerge, you can do this to create a neater garden set-up and have the rows closer to each other. As a bonus, training the vines guarantees perfectly straight cucumbers.

As mentioned earlier, the greenhouse is an excellent place to grow cucumbers. You can treat it as you would a garden, but if you want to train them to grow vertically, the process is even more simple. You start by planting the cucumbers in pots and place a stake between each of them.

A useful tip is to ensure that the vertical stake extends onto the overhang of the greenhouse roof and then place a string along the roof length horizontally. The cucumbers should grow upward and along the string. Over time, the cucumbers will hang down, making harvesting easier.

Training cucumbers in the garden is quite similar, but you’re placing the stakes directly into the soil between each plant. You then tie the wire along the top of each stake horizontally until you’re satisfied with its stability. The cucumbers should grow vertically, but gardeners often tie the plant onto the support to maintain stability.

A trellis or wire mesh at the back of the garden works well as support as long as it is around 6 feet high. Aim to have the end at 6 inches above the soil, so that you can remove weeds comfortably later on. However, be mindful that you are not shading other plants when positioning the trellis.

You have probably seen how one can expect the cucumbers to grow vertically through the stakes in both areas. To help with success, it’s essential that you also twine the plants themselves around the support. Remember that you still need to guide the cucumber vines, and in some cases, you may need to tie them in place as the tendrils are struggling to cling.

You can use clean rags for the cloth strips, but make sure that they are soft, and you don’t tie them too tight. Loose loops around an inch in diameter are enough to guide the cucumbers and allow the growth of vine stem. Once the cucumbers have bound securely, you can cut or remove these cloth strips.

How to encourage growth and fruiting? The good thing with training cucumbers is you prevent the vines from getting tangled, which makes drying and prevention of pests easier. However, you still need to do other practices, such as maintaining the soil moisture and fertilizing every two weeks using a liquid fertilizer.

As the vines mature, you can also mulch and pinch the flowers, tendrils, and side shows. With the latter practice, you want to to continue pinching these parts until the plant successfully clings to the wire. Once that happens, you can have the sideshows run along the wire or string horizontally.

Should You Prune Trained Cucumbers?

Over time, you will need to prune the vertical cucumbers to make the area more manageable. First, start from the bottom to give the plant space on the trellis to fill later on. You can also remove the fruits and lateral runners in this area.

However, make sure you’re not removing the main vines, and you’re not crushing the stem when pruning.

Vertical cucumbers allow better use of space, but vegetables like tomatoes, corn, cabbage, broccoli, and peas will also make great companion plants for trained cucumbers. Just make sure that you are giving every crop their requirements, such as spacing and light. It’s also worth noting to avoid planting herbs and potatoes with cucumbers.

You can harvest cucumbers a week after flowering just before the seeds mature and the fruits get too large. Gardeners recommend regularly picking to encourage the production of the plant. The fruits should store well for two weeks at 55°F.

Gone are the days where you have a cluttered garden of cucumbers. With some stakes, wire, and a trellis, you can learn how to train cucumbers indoors and outdoors. The process is as simple as placing the stakes between each plant or pot and having the string or wire horizontally.

You may also need to guide the cucumbers by twining them around the support or tying with cloth strips until they’re secured.  Afterward, maintain soil moisture and fertilize every two weeks to encourage growth. You can also pinch the side shows, flowers, and tendrils until the plant reaches the wire and then train the side shows onto it. 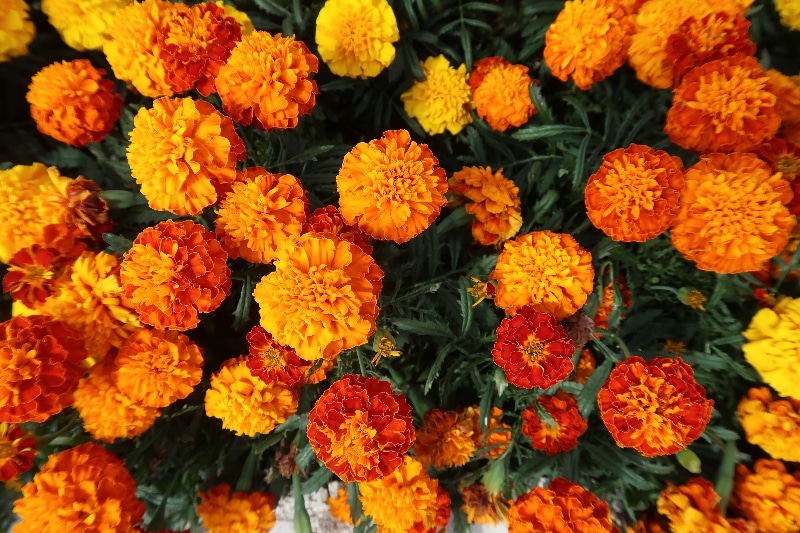 Want to know how to harvest marigold flowers and seeds? Marigold flowers are a mainstay in most of the gardens. They bloom beautiful flowers all season long and they’re easy to grow from seed. Knowing how to save marigold seeds is essential if you want to continue growing them the next season.

Fortunately, harvesting marigold seeds are quite quick and easy. You only need to take the seeds from the flowers and let them air dry before storing them during the winter season. You can pack it up with a container or seed packets to save even more for the next growing season. Some of the marigold flowers are edible and best to mix in your salads to add a distinct flavor to it.

The tools you’ll need to harvest marigold flowers include a basket or other available containers that can be used in harvesting flowers. You’ll also need some paper towels, a sharp knife, a pair of scissors, or gardening shears.

Since you need to evaluate or describe the process, get yourself some notes. Seed packets can be envelopes or closed-air containers excluding plastic containers and bags.

How to Harvest Marigold Flowers and Seeds

Here’s how you can harvest marigold plants for flower arrangements and bouquets:

It’s important to wait until the right time to collect marigold seeds. You can harvest the seeds when the petals are dry already (when the base of each flower turning brownish). However, make sure there’s still is a bit of green color left in the base of the bloom. If you also wait until it is completely turned brown, it may start to rot or mold. It’s important to wait for the perfect time to harvest marigolds since the timing is crucial to have the right quality of marigold seeds.

Tip in harvesting: While you are harvesting, simply cut each marigold flower heads using your cutting equipment or either pinch it with your finger. However, be sure not to pull the flowers as it can harm the roots of your marigolds.

Get your paper towel and set it on a flat surface. After, hold each bloom’s base, pull-off, and discard the petals and leaves of it. Then, you will easily notice the attached seeds inside the base. In the meantime, set the prepared blooms on your paper towels for bulk removal of seeds. You may also use larger towels to manage and accommodate the abundant blooms of your marigolds.

Marigold seeds are likely to have a long, slender, and pointed appearance. Divided ends with black color and white color on the opposite edge. Gather your blooms, pull-off all petals, and leaves, and start pulling the seeds from the base. After getting all marigold seeds, discard the base in a single place like in bins or garbage bags. After sorting, put another paper towel on another flat surface and spread the pulled marigold seeds on it.

As mentioned above, let your marigold seeds air dry for about a week in an uncovered paper towel. It will enable them to be preserved even in frost season and will prevent it from getting rot and mold.

After drying the seeds, gather them and start placing them inside your seed packets to prolong their lifespan and will still be used after the frost date. Do not use plastic bags in storing your marigold seeds because it will retain residual moisture, which will affect your marigold seeds and even get rot and mold. To avoid forgetting about your marigold seeds, put a label on it to prevent possible disposal if unlabeled.

After storing your collected marigold seeds, it is perfect to plant during the growing season. You can enjoy once again the benefits of it from house beautification to an edible ingredient for your salad.

Marigolds are especially good for repelling insects and pests, making them companion plant for tomatoes, eggplants, tomatoes, and chili pepper because of its pungent scent of some variety. It is amazing having this kind of flow in your plant, imagine you don’t only have a beautiful attractive garden but having also a very natural insect and pest repellent that will protect your plants from any abrogation.

African marigolds have larger flower heads on plants that grow from 10 to 36 inches tall. While French marigolds are smaller and bushier, having only two inches of flower head across on plants and only having six to eighteen inches height. Sizes and colors vary on its classification, having a mixed combination is pretty great, will also add more pleasant and abundant color to your garden.

The Benefits of Growing Marigolds in a Greenhouse

Have you ever thought of growing your marigolds in a greenhouse? If you haven’t, it’s time to consider getting a greenhouse.

Greenhouses are great for keeping your marigolds safe from pests and diseases. Marigolds are susceptible to insects and blight, such as caterpillars, aphids, leaf spots, and mildews. You can lower the risk of plant damage by growing your marigolds in a greenhouse.

Additionally, greenhouses can also keep your plants safe from bad weather that could easily damage your flowers.

Final Thoughts on How to Harvest Marigold Flowers and Seeds

Knowing how to harvest marigold flowers and seeds is crucial if you’re planning to plant them in your garden. These beautiful flowers that usually come in yellow and orange colors are a great addition to any garden or flower arrangement.