It’s easy to learn how to make a wedding lasso by simplifying it into two steps. We will also talk about everything you need to know about this tradition.

We recommend browsing our blog for more tutorials regarding the important wedding symbols if you want to make them yourself. For example, do you know it’s possible to learn how to make a wedding ring? 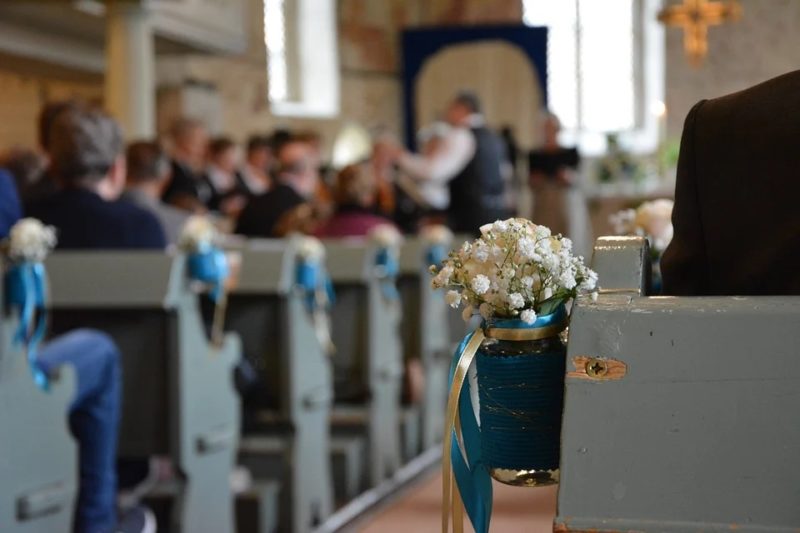 How To Make A Wedding Lasso Yourself

Who Buys The Lasso For A Wedding?

The lasso godparents traditionally buy or provide the wedding lasso. This is because they are a married couple expected to be the role models of the newlyweds.

The lasso godparents will give the lasso on the couple’s wedding day as a gift. In Hispanic weddings, they are also called the los padrinos de lazo.

However, it’s worth noting that the wedding lasso in some families is not bought. Instead, it’s an heirloom that will be passed down from every generation that gets married.

What Is A Lasso At A Wedding?

The wedding lasso is also called the wedding cord, which is essentially a beaded rosary strand. It is primarily used in Catholic weddings and is prevalent in Hispanic cultures.

Some wedding lassos even use flowers, while others are made with twine or ribbon. Furthermore, some wedding ceremonies can also use a wedding lasso to symbolize the union of the newlyweds, regardless of their religion.

What is the meaning of the wedding lasso?

The wedding lasso symbolizes the unification of the couple in marriage. The infinity symbol being formed by being lassoed also mean that they’ll be together for the rest of their lives.

The infinity symbol can be viewed as the number eight, which means new beginnings. And of course, traditional rosary wedding lassos mean that God unites the bride and groom.

Catholic weddings are among the weddings that usually have a lasso ceremony. And if you’re a guest on one, read what to wear to a Catholic wedding to ensure that you’ll be appropriate.

How Do You Do A Lasso Ceremony?

The lasso ceremony is traditionally performed after the vow and ring exchange at the wedding. The couple is still kneeling at the altar; then the lasso godparents will wrap the lasso around their shoulders and form an eight shape.

The lasso is also accompanied by a prayer asking God to bless the couple’s union. The wedding lasso is meant to stay on the couple throughout the remaining part of the service before the priest or lasso godparents remove it.

After the ceremony, what happens to the lasso? It’s common for the couple to keep and display it in their house, but they can also use it as a rosary for praying.

What Do You Say In A Lasso Ceremony?

There are different ways to do the lasso rosary ceremony ritual. The lasso godparents or the officiant can say a prayer for the couple.

The prayers to be spoken on the lasso ceremony are readily available online, but to give you an idea of how it will flow, read this:

Prayer is mentioned declaring the couple’s incorporation of the Lasso ritual to their wedding ceremony. The prayer talks about the couple’s intent to be bound together in front of their family, friends, and God.

The officiant might ask the couple to hold hands and look into each other’s eyes when declaring their intentions. Then, the lasso godparents will drape the lasso in the shape of the number eight around the bride and groom’s shoulders.

Another prayer is spoken about the bond between the newlyweds and that they are joined in everlasting love and trust. The officiant finally offers a prayer, before removing the lasso and presenting it to the groom to give it to the bride.

And that’s it! We’ve just tackled how to make a wedding lasso the traditional way using rosary beads and pearls.

However, you’re free to use other materials for the wedding lasso as there are also those made from ribbon, twine, and even fabric flowers. Then for the usage of the lasso, make sure to talk with your chosen lasso godparents.

We recommend talking with other elder relatives to know more about the proper lasso ceremony. You might not even need to make one since some families have a lasso as an heirloom.