How to loosen a ratchet strap? A ratchet strap generally has three critical positions- including ratcheting, loosening, and locked.

Well, a ratchet strap is useful to secure your event tent. It’s heavy-duty, easy to use, and affordable. But, what if you want to loosen it? For this post, we will discuss the steps on loosening a ratchet strap.

The typical ratchet strap has a tab positioned near the handle or a thumb hole in its ratchet plate. This strap will serve as the mechanism of the ratchet.

Here, you have to clutch the handle and then disengage the ratchet’s lock by pulling out the plate of the ratchet.

Keep holding the ratchet plate out as you rotate the handle until it opens completely.

You might as well turn it towards a flat position. Do this until you release the bottom of the plate against the spring-loaded pawl.

Push the handle of the ratchet so that it will be open a bit further. Then, you can already release the pawl as you are pulling the strap at the same time you are unwinding it.

After doing this, remember to close the handle to ready the assembly for the next use.

There are more things that you should know, just read further! 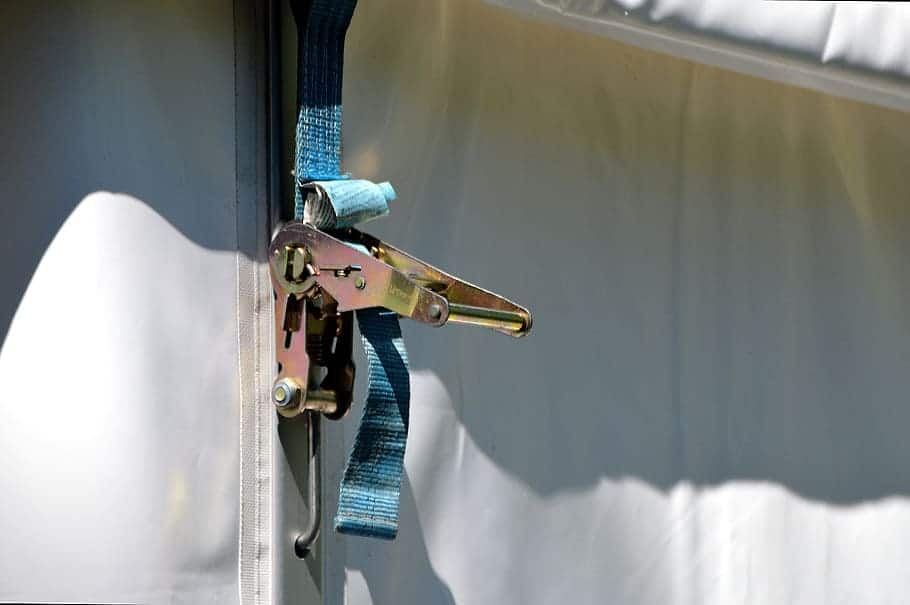 Ratchets are utilized to loosen or tighten bolts and nuts, particularly in sockets conjunction.

How can you determine the right size to use?

Take note that these sizes pertain to the width of the metal square peg that is rotating and is typically positioned at the end of the ratchet.

This is fitted into its corresponding square hole that you can find at one end of a socket.

Such a square peg on a racket commonly has a small metal ball from the side of the peg. This is also fitted into the socket’s detent.

When a ratchet is challenging to release, then it is most likely stuck.

Why do you think it’s stuck?

Usually, this occurrence is caused by corrosion; it can obstruct the movements of the different components.

In such a case, here’s what you should do:

You have to lubricate the surfaces of those parts lightly.

You can use an anti-seize for this.

But you might as well spray a lubricant thinly by using an applicator straw so that you will be able to reach other friction areas.

As you do this, you have to operate the ratchet assembly to distribute the lubrication on the entire parts.

Eventually, the ratchet will work in its proper order again.

The overly tight straps might need more effort before you could release it.

You have to ensure that the ratchet plate is aligned on the pawl release.

Remember, it should not stay just before the pawl release.

5 Steps In Loosening The Ratchet Strap

How to loosen a ratchet strap?

Before you loosen the ratchet strap, I suggest that you first examine its position.

If you have a hard time loosening it, it might be because its position does not support loosening it.

You can look up here the position of a ratchet strap that cannot be loosened.

Step #1. Make sure the ratchet is locked

In loosening the ratchet, it should be in a locked position.

If not, you cannot loosen it. Remember that!

In this step, you have to prepare by squeezing the manual pawl.

You might as well check whether or not your ratchet is a quick-release model.

In case it has a button at the top where the socket is attached, then it is a quick-release.

With this, all you have to do to release the socket is just to depress the button and pull it off afterward.

But if your ratchet is not a quick-release model, you have to follow the following steps.

At this point, you now have to squeeze the manual pawl.

Why should you do that?

Doing so will unlock the ratchet strap.

But then, you should not forget to disengage the auto pawl first.

You have to continue pressing the manual pawl and then thump the bar upwards as far as you can.

Remember that it will not work if you are not clutching the manual pawl simultaneously as you swing it up.

Step #4. The ratchet should be flat

Always make sure that the position of the ratchet is entirely flat.

You will know that you are doing it accurately if the ratchet strap pops a little.

If ever the strap does not pop, it would simply mean that you have not to disengage the automatic pawl.

What I am trying to tell you is that you have to disengage the two pawls.

You have to ensure that both pawls are almost flat.

If you could position it properly, you could not pull the ratchet handle back down anymore. Why so?

It’s because it will already be locked in its flat position.

Step #5. Tug it towards you

Now, you have to tug the ratchet towards you to loosen it completely.

And it’s all done. Finally, you can pull off the ratchet strap.

How to loosen a ratchet strap?

Remember that when you are tightening a ratchet’s strap, at least one of the two pawls should be engaged using gear teeth.

But when you are to loosen the strap of a ratchet, both pawls should be disengaged.

When you are having trouble as you are loosening the ratchet strap, it is most likely stuck.

In such a case, you commonly forgot to disengage the manual and the auto pawls.

View Knowledge Base
Ann Miller
Posted in:
Tents
Previous article
How To Insulate An Existing Metal Building? 3 Awesome Methods!
Next article
How To Root A Schefflera. 2 Best Methods
Leave a Reply Cancel reply 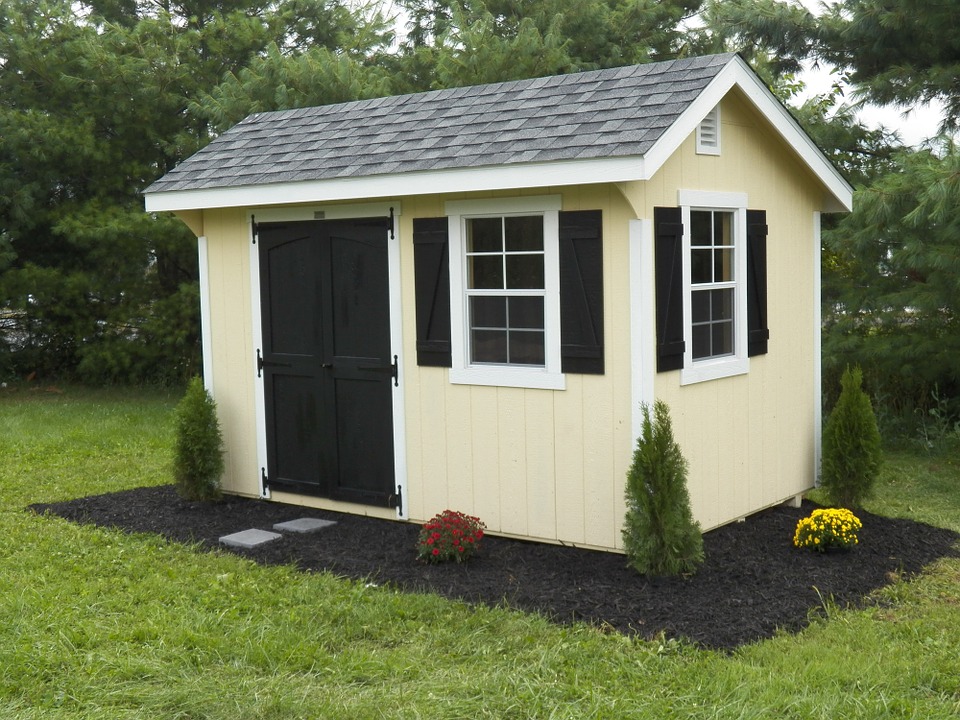 Do you want to know how to anchor a shed? For storing yard tools from the environment, outdoor sheds are perfect.

On concrete slabs or constructed over a wooden frame, most outdoor sheds are.

It would be best if you anchored your outdoor shed to the floor to safeguard your shed investment.

High winds, especially in areas vulnerable to tornados, may cause an outdoor shed to blow over or worse. Outdoor sheds anchoring is well worth the time.

The best way to anchor a shed is concrete piers; it is easy to build and economical.

Basic Steps In Anchoring A Shed

When constructing a new shed on concrete piers, the pier plan is laid out based on the shed design.

Here are the basic steps on how to anchor a shed:

Step #1. Dig holes and pack them up with sand and dirt.

Step #2. Put a concrete base tube to build it up.

Step #3. Level it and fill it with concrete to the appropriate height.

Step #4. Until the concrete sets up, set a galvanized anchor bracket in.

Step #5. Align the brackets and level them, and you are all ready to protect your shed.

There are other ways that you can use too!

This article will show you some ways to tie down your storage shed in this article and address some of the reasons for anchoring your outbuilding.

This article will show you some ways to tie down your storage shed and address some of the reasons for anchoring your outbuilding.

How you can anchor a shed on a different type of ground?

Steps In Anchoring A Shed On A Concrete Slab

A concrete slab is made up of a flat surface.

In this part, you’ll know how you can anchor a shed on it.

Drill holes with a fair bit into the sill plate along the inner circumference of the shed.

Allow the bottom frame a certain diameter as the anchor frame.

Use clay or soil to make up a layer of the sill.

Create holes with a diameter of less than 2.5 inches using a drill and a hammer. Insert the masonry on the openings of the sill plate.

Over the anchor’s threaded section, place the flat washer and loop the retaining nut to the anchor’s top. The nut should not be threaded to the bottom of the thread.

Step #4. Insert the anchor into the slab

The section does not have threads at the bottom of the anchor.

With a hammer, pound the anchor through the openings and into the concrete slab.

Pound the anchor bolts until the bottom of the holes hits them.

Tighten the retention nuts with a socket wrench on the sill plate.

Steps In Anchoring A Shed With A Wood Frame Platform

Aside from concrete, you can also anchor a shed in a wood frame. Here’s how!

Step #1. Place the anchor at a slight angle, accelerating downward on each tip

Force the anchors to the ground until they are entirely placed on the bed.

Position the handle of the hammer in the head of the eye bolt to twist the anchor further into the ground stone. Ground anchors have an auger end that drills into the soil.

Step #2. Secure all wires and cables

Loop one end of the given anchor cable through the head of the anchor’s eye bolt.

With the cable clamp, secure the cable end to the anchor. Using a socket wrench, connect the clamp.

Step #3. Thread the cables to the shed

Loop the end of the cable into the head of the anchor’s eye bolt and pull the string line.

Through a cable clamp, secure the cable to the anchor.

Repeat on both shed corners.

How To Anchor A Metal Shed

Metal sheds are available in various sizes and are typically heavier than huts made of plastic.

From the outside, you can tie the shed to a concrete pile at each corner.

A metal strap anchors the shed and roof, or a cord running up the wall between the roof metal and metal rafters.

Back down the opposite wall and fixed to a ring or circle bolt in the concrete piling.

Spikes in the Auger type tie down are also a perfect way to lock the steel shed to the ground.

Now, it’s time to screw the auger into the earth at the four corners.

And you can do this method as an alternative to the concrete pilings.

Best Way To Anchor The Shed To The Ground

Shed on a concrete ground is the best way to secure your storage.

Wood or metal anchors can deteriorate with time when in contact with the earth.

When they wear out, wires, plates, and bolts can be tested and patched above ground.

That is simple and less costly and functions as a new and retrofit solution.

Concrete anchor for tent lasts a long time and will even make your stay a long time in your shed.

It costs more, so it’s definitely worth what you’ve got sitting on it.

For you to maintain those supplies and resources that cannot be put at home, your shed is necessary.

For it to stand correctly, you need the appropriate materials and protection.

It helps to keep the goods safe and dry from all environmental conditions. That’s why anchoring the shed to a foundation is advised.

I hope that this article on how to anchor a shed helps you whether you’re a beginner or a handyman.