Chemicals are undeniably harsh, which is why you must learn how to get rid of powdery mildew organically. For starters, here’s an easy-to-follow guide so you can ease that crease in your forehead in the process. 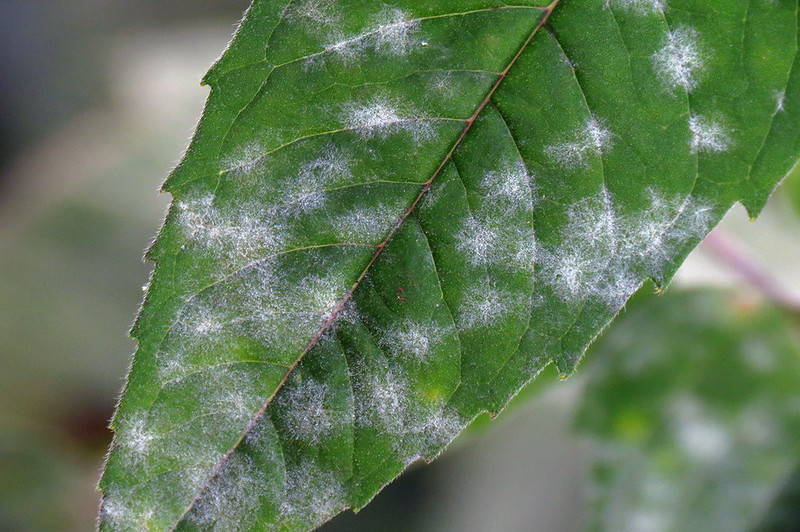 Powdery mildew is a global threat, with hundreds of fungi capable of causing it and the potential to contaminate over 10,000 plant species. This is especially the case when you consider the entire reduction of crop yields and plant life.

In the initial stages of an illness, infected leaves show as white or gray patches. They can rapidly grow to the point where they totally cover the afflicted plant sections with a noxious plague.

Hundreds of fungal species in the Erysiphales order create powdery mildew, which is known as powdery mildew. The white to grayish talcum-like powder found on the foliage of afflicted plants gives this disease its name.

To know more about a powdery mildew’s appearance, browse through this guide about what does powdery mildew look like. You need to fully know what you are looking for to deal with it!

This powder is made up of mycelia and spores. The illness is disseminated by spores from the asexual stage, while the sexual stage generates fruiting bodies, which are necessary for hibernating.

While wind generally spreads the spores, insects like wooly aphids can transmit the illness by feeding on plants. Infection is widespread in densely planted areas with inadequate air flow, as well as shady and moist places.

To be more knowledgeable about this type of mildew, learn about how long powdery mildew live.

How To Control Powdery Mildew The Organic Way

Stressed plants that are developing in suboptimal areas or cared for poorly or inappropriately may fall victim to this fungal disease more readily than healthy ones.

Powdery mildew infestations are usually minor, which is excellent news. Plants that are otherwise viable will typically recuperate on their own after temperature fluctuations and with adequate care to increase airflow.

Treatment methods that do not need the use of conventional fungicides are available for serious infections or a pervasive issue throughout the garden.

Fungi can acquire resistance to fungicides if they are used frequently. Both agriculture and human health are affected by this.

Cultural controls are those aspects of agriculture and gardening that deal with changes to the growth environment. They are an important part of organic gardening and integrated pest management (IPM).

Changes to the nutrient quality or pH of the soil, watering more or less, and ensuring that plants receive the proper amount of sunlight are just a few examples.

In general, the sun is the enemy of fungal illness, so make sure to give your plants as much sun as they require to grow, whether it’s shade, half sun, or full sun.

Watering from above is sometimes suggested as a strategy to avoid this disease, but others highly urge against it because it raises the humidity in the plant’s core. A rise in humidity like this could induce infection or worsen an existing condition.

Powdery mildew can be controlled by spraying milk on sections of plants that are showing symptoms, especially if done early in the infection.

Many organic gardeners utilize this strategy, which has been proven beneficial in experiments on tomatoes, apples, grape vines, and other plants over the period of more than 60 years.

Milk should be diluted 1:10 with water and sprayed on your plants at the first indication of infection, according to conventional practice. Either powdered or liquid milk can be used.

Higher milk concentrations may, however, reveal to be the most effective, according to extant data. For moderate to severe infections, try a 50/50 combination of liquid milk and water, or even full-strength milk if you don’t have a huge area to treat.

Fill a spray bottle halfway with the liquid and spray all of the damaged portions of your plants, particularly the stems and the bottom part of leaves. Proceed to apply twice a week until you see benefits, and reapply if there has been rain.

Although the spray can produce a sour odor in the hot heat, milk spots on plants’ leaves should not be a concern. If you sprinkle milk on your plants once a week, it can help to avoid diseases.

Some experts argue that raw or organic milk is better, and that the lipids in whole or 2% milk can obstruct therapy, while others argue that it doesn’t matter which type you use.

If you’ve experienced powdery mildew issues over the years, try growing resistant versions of your preferred flowers, fruits, and vegetables in your garden next year. This information will be included in cultivar profiles in catalogues and on seed packs.

Knowing how to get rid of powdery mildew organically does not only save you from spending bucks on fungicides. Choosing the chemical-free way does not merely keep the mildew at bay but also keeps everyone healthy at home!