The first step on how to get rid of mildew smell in bathroom is to check where it came from. You’ll find out more about this as you go on and read the article. 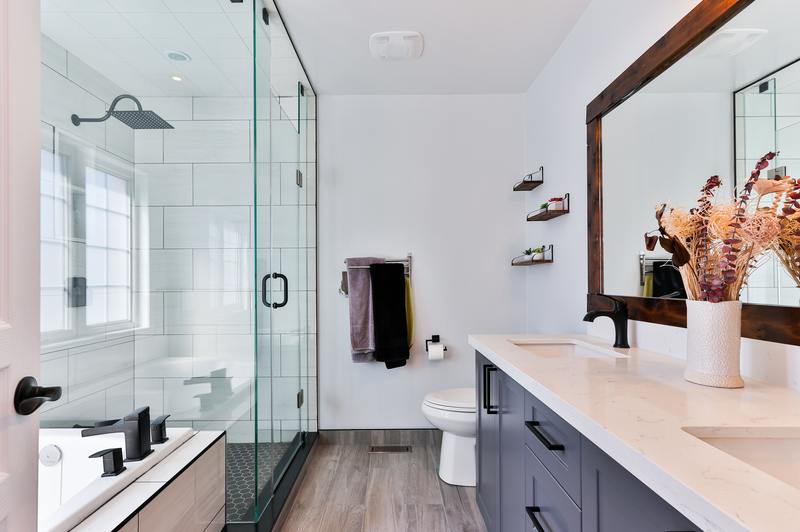 Your first thought upon finding your bathroom smelling earthy may be that it lacks ventilation. Well, that’s partly the reason.

If you want to compare mildew and mold smell, here’s an article that will answer your question on, “what does house mold smell like?”

Unlike mold, however, mildew is not as damaging to your household. Although it may attract mold growth, if that happens, that’s another situation entirely.

After learning about the smell of mildew, you may wonder how it grew in your bathroom. You’ll see the answer to that below.

How Does Mildew Grow In Bathrooms?

Mold and mildew have plenty of similarities. One of them is the criteria of the environment where they can grow.

To be more specific, mold and mildew need moisture, a food source, a particular temperature, and oxygen to grow. It may sound complicated and impossible to meet, but the last criterion they need is mostly water.

This means that the other criterion exists in almost every part of your household. Mold and mildew spores have to wait for leaks (or any other form of water damage) to grow on a surface.

Mildew generally grows on the tiles of your shower, and it can stain tiles and paint. However, as mentioned above, it can attract mold growth, and mold is more dangerous to deal with.

Mold can penetrate the surface it grows on, thereby weakening its integrity. If the mold gets into your drywall, then it may ruin it.

After mold contamination, drywalls usually get replaced. To lower your chances of acquiring mold, here’s an article on what is the best mold-resistant drywall that may help you.

Since the musty smell is but a warning, there are several steps before you remove the earthy odor in your bathroom. Look into the steps and the varied ways of getting rid of the mildew scent.

What Are The Ways To Get Rid Of The Mildew Smell In My Bathroom?

Step #1. First, you have to figure out what caused the mildew smell. As mentioned above, it may be due to a lack of ventilation.

However, it may also be due to leaks from your pipes. Look into where the growth is concentrated because it may tell you where the water damage is.

Watch out for mold growth as well. Here’s an article differentiating mold and mildew to help you determine which fungi you are dealing with.

Step #2. Next, separate the affected items from those that aren’t contaminated. Then, clean them accordingly.

Since mildew does not ruin items like mold, it will be easier for you to remove them. Also, you won’t have to discard the contaminated items.

Step #3. After clearing your working area, you can now work on getting rid of the mildew smell. Naturally, this involves killing the mildew as well.

Below are the different items you can use to kill mildew in your bathroom:

To use tea tree oil (TTO) against mildew, you must blend water and tea tree oil. Then, put it in a clean spray bottle.

For every cup of water, you only need one teaspoon of TTO. If you think your mildew problem requires it, you can add more TTO.

However, tea tree oil is not cheap, so it’s better to be frugal with it. However, it is your choice in the end.

Lastly, spray the TTO mixture on the affected area. Leave the solution in the area overnight.

The next day, wipe the area down, and air dry it.

For extensive contamination, mix two to three teaspoons of it with pure white vinegar and put it in a container. Then, spritz it on the affected area.

Let the baking soda-vinegar solution sit on the surface for up to 20 minutes. To remove the residue, wipe the area down with a damp cloth.

You can also add water to the baking soda to make a paste instead. Then, put the paste on a toothbrush and brush off the mildew.

You now know that there are varied ways on how to get rid of mildew smell in bathroom. There are also several steps before dealing with mildew, so hopefully, you get to address those.