Try three options to learn how to decorate a gazebo for a wedding. In this article, we’ll use flowers, garlands, and pillars to dress up your wedding gazebo.

We have also included a guide on how to light a gazebo for a wedding so you’ll have everything you need for decorating. And if you’re styling the reception or wedding venue, feel free to browse our blog. 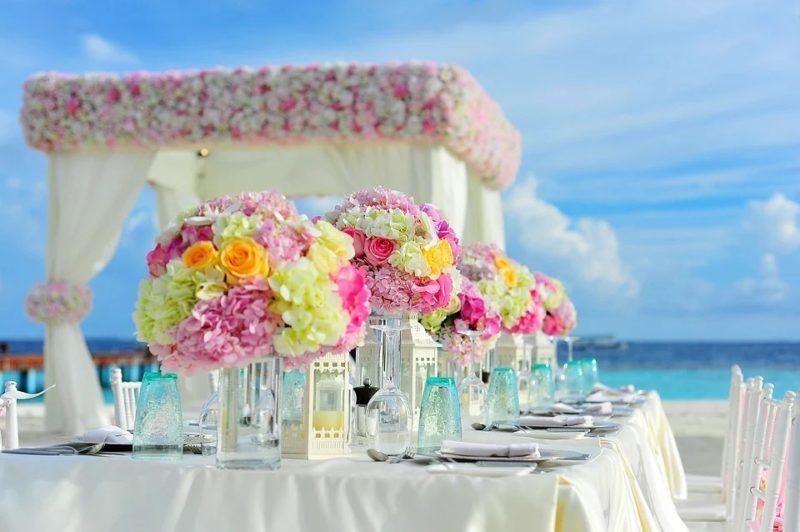 For example, do you know what fabric is used for wedding draping?

How To Decorate A Gazebo For A Wedding Tastefully

One of the best decorations for any wedding is flowers. You can play with floral arrangements to make the gazebo more visually attractive.

An example is to hang baskets filled with flowers and greenery around the edge of the gazebo. You can also add some fabrics to bring everything together and cover some portions of the gazebo if needed.

Place a fabric panel on each side of the gazebo’s entrance, similar to the curtains of a window. Then, add flowers in the middle of these fabrics at the highest point of the gazebo.

You also don’t have to attach the flowers and greenery directly to the gazebo. Instead, you can just put a stand of flowers and plants on each side of the gazebo’s entrance.

The gazebo posts are perfect for decorating with garlands that embody the theme and color palette of the wedding. And depending on the style of your gazebo, you can also utilize the railings and ceiling with the garlands.

Since plants can be difficult and expensive to decorate with, you can opt for faux plant garlands. Also, consider fake vines woven around the gazebo structures for a dreamy atmosphere right out of a fairytale.

The garlands can also be made from other materials such as textured and multi-color ribbons. Photos will look more cohesive if you introduce some colors on the wedding party’s attire into the garland.

If you can’t decide on a color scheme for your wedding, consider something unique like green. For example, different colors go with emerald green for a wedding, which would be interesting, especially for decorating gazebos.

While gazebos already have different structures such as posts and railings, you can also add more pillars around them as decoration. Having extra setups and arrangements not directly attached to the gazebo is a great way to utilize space, especially if the area is oversized.

You don’t want to overdecorate the gazebo that it will take the attention of the couple. But, it should still work as the perfect backdrop for the occasion.

You can even align a few pillars on the path towards the gazebo. They should be a tad shorter than the gazebo itself and make sure to decorate them so they wouldn’t look out of place.

How Do You Light A Gazebo?

Having lights set up the atmosphere of the wedding. But ultimately, the extra lighting can help with better photos and visibility, especially at dusk weddings.

If you’re on a budget, consider lighting a gazebo with candles. This choice is particularly fantastic for a romantic and intimate event, but be mindful of the flame hazard.

You can set some real candles around the gazebo as long as they are inaccessible to guests and far from flammable decorations for safety. Or for peace of mind, there are flameless candles that use LED instead.

Consider using candles as lanterns and hang them around the roof of the gazebo. You can also use large ones on columns near the entrance of the gazebo.

String lights can create an ethereal setting, especially for a garden wedding. They are easy to decorate with because you can wrap the strands similar to when decorating the gazebo with garlands.

There are even different styles and colors for string lights, so it should be easy to combine some according to the ongoing wedding theme. The only consideration is how you’ll strategize their placements so you can neatly hide their connection to the outlet.

A helpful trick for this potential issue is to use other decorations and oversized structures such as pillars near the outlets. Just be mindful of preventing a tripping hazard with the wires.

If you have the budget and want a luxurious setting with the gazebo, ditch the lamps and opt for something grander like a chandelier. You can place it directly above the couple or center of the gazebo.

You don’t need multiple chandeliers, as one should be enough for function and aesthetics. There are even various photos online that you can take inspiration from, and if required, it’s also possible to make an outdoor chandelier.

The right chandelier can bring elegance to the gazebo, especially if the placement and light color are planned well according to the venue and theme of the wedding. However, your limitation would be ensuring that you can energize the chandelier without wires and cables showing.

And that’s it! We just learned how to decorate a gazebo for a wedding, where you can consider flowers, garlands, or even pillars.

If you want something beautiful but functional, you can also light the gazebo with candles, lamps, string lights, or even a chandelier. We hope these options gave you many decorating ideas; leave us a question if you have any.