The instructions on how to clean mildew from caulking in a shower are written below. The first step is to protect yourself, and the last step is a bit more complicated, but it’s a sure-fire way of fixing your problem. 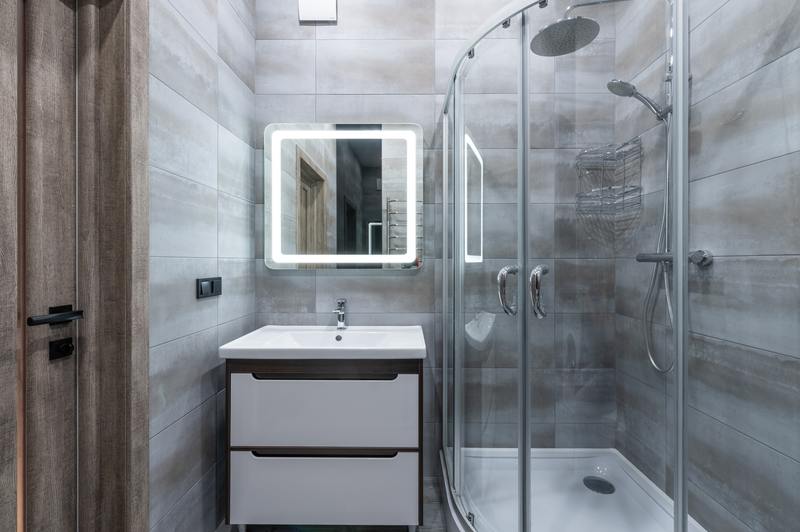 How Does Mildew Grow On Shower Caulks?

There are several causes of mildew growth on shower caulk. It can be due to poor grout, wet wallboard behind the caulking, improper insulation, and misaligned tiles.

The issues mentioned above are connected because having poor insulation can lead to wet wallboard, leading to mildew growth. Misaligned tiles inevitably lead to poor grout, the cracks from this would then house moisture, and you know the rest of what will happen.

All of the above causes contribute to trapped moisture, which invites mildew spores to settle on the caulking. Apart from humidity, soap suds trapped on the grout can also lead to mildew growth.

How To Detect Shower Caulk Mildew

One way of detecting mildew growth on shower caulk is the smell. If the area lacks ventilation, you’ll likely notice the smell immediately.

While encouraging airflow may dissipate the unpleasant smell, it does not fully solve the problem. First, you have to inspect for water damage, fix it, and then proceed with the mildew removal.

Apart from the smell, inspect the area and look for a powdery or downy growth. If you find any, that is mildew; however, please do not touch it to verify because it may trigger allergic reactions.

What Are The Dangers Of Shower Caulk Mildew?

Mildew is not as harmful as mold. In fact, it is known as the milder version of it.

However, this does not mean that mildew does not have adverse health effects. If exposed for too long, it can still cause skin allergies and respiratory issues.

You should not inhale or touch mildew when you smell or see it in your household.

One danger of mildew is that it encourages more moisture as it spreads. This then gives mold spores a better chance of growing alongside the mildew.

If you notice a few mold clusters alongside your mildew, that’s a severe problem. Mold breaks down the objects where it settles on, which means that it would increase your repair costs.

To prevent mold spores from growing, here are three ways on how to get rid of mold spores in the air that can help you.

Cleaning off mildew goes beyond disinfecting. It would help to inspect the area for water damage since it’s the leading cause of mildew.

If mildew growth is due to faulty grout or misaligned tiles, then you have to fix those too. Mildew contamination involves many processes, but the cleaning process is short.

Here are the steps:

Before cleaning off the mildew from the silicon caulk, you have to protect yourself first. Wear gloves and a mask and a long-sleeved shirt to prevent exposure to mildew.

If you use silicon as caulk, we recommend that you use baking soda or vinegar to clean off the mildew. You can use them separately or together.

First, use undiluted white vinegar and let it sit on the problem area for about half an hour. If you do not see any mildew getting removed or lessened, repeat the process.

For persistent stains, sprinkle some baking soda on the mildew-contaminated area, then spritz some vinegar on it as well. Don’t panic when the surface starts to bubble, it’s a typical chemical reaction, and it’s harmless.

After the bubbling stops, get a small brush or an old toothbrush to scrub off the remaining mildew on the silicone caulk. If you still see stains, then repeat the steps. If the caulk is not silicone, you can use bleach; however, do a spot test first as it may lead to discoloration.

If all else fails, you have to replace your shower caulk. First, you have to clean the whole bathroom and remove the mildew growth.

Then, remove the caulk using a scraper or a utility knife. Carefully scrape off the caulk bit by bit to not damage the surface.

For this task, you need a thick glove, so you do not accidentally cut yourself. After removing the shower caulk, wipe the excess caulk and the residual scum.

Then, vacuum the joint to ensure that there is no more residual caulk. Apply the caulk the next day so that the area is fully dry, which can help the caulk to adhere better.

Lastly, use a caulk gun to apply your caulk better and faster.

You’ve learned how to clean mildew from caulking in a shower and how to replace your caulk in case cleaners do not work. Hopefully, these steps were of help with your mildew problem.