The answer to how many bridesmaids are there in a wedding is not constant. However, we will give you some ideas on the common numbers that the bride chooses for her bridal party.

We will also discuss some expectations and customs regarding picking a bridesmaid for your wedding. On that note, why not learn about who wears corsages at a wedding as well? 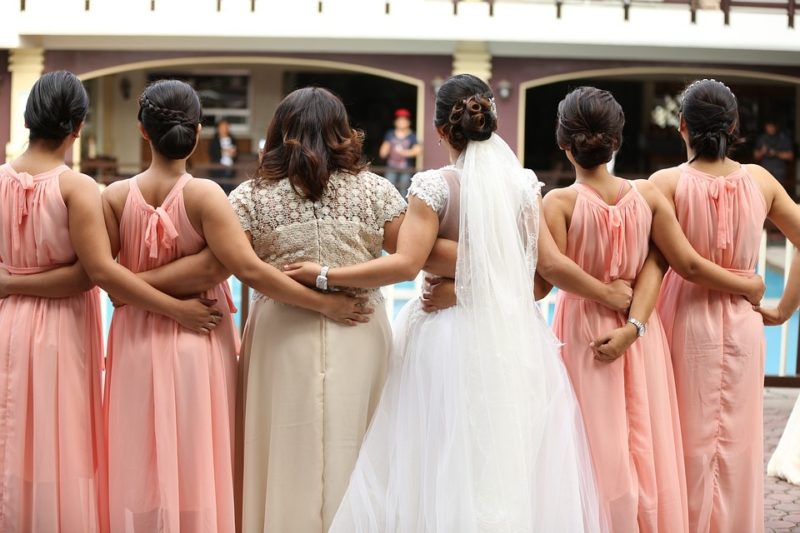 They are often given to bridesmaids, but it would help you know which other female guests can have them.

How Many Bridesmaids Can You Have In A Wedding?

No rule limits you to the number of bridesmaids you can have at a wedding. You don’t also need to plan the bridesmaids as odd or even numbers.

In fact, it’s acceptable not to have a bridal party if you don’t feel like having one. Nowadays, brides even break traditions and include close male friends in their bridal parties.

Who should you pick as your bridesmaids?

To help you decide on the number of bridesmaids to have at your wedding, it would help you know how to pick them. If your husband-to-be has already picked out his groomsmen, you can use the same number to coordinate the bridesmaids and groomsmen.

This can be helpful for a symmetrical wedding photo, and the bridesmaids will all have an escort during their walk down the aisle on the ceremony. Then, you can choose to include your sister, sister-in-law, and best friends since they traditionally make up the bridal party.

However, feel free to include other relatives and good friends since you don’t need to follow the expected custom if you don’t want to. You can even have the women who chose you in their bridal party.

And of course, we all know that some close families and friends always mention how they’d want to be part of your bridal party from the start.

What Is The Average Number Of Bridesmaids?

The most common number of bridesmaids is three to five. However, some even only pick two, and some brides can choose not to have any bridesmaids at all.

There is no wrong number when it comes to the number of bridesmaids you want for your bridal party. But, ultimately, do not let the pressure from other people force you into picking people you don’t like as your bridesmaid.

You’ll have an easier time deciding on the number by making a list of the people you’d like to stand by your side at the altar. Furthermore, consult your partner on the size of the wedding you’re planning.

The budget, venue, and important people to be included will dictate how you and your significant other plan your wedding party. Do not overthink choosing bridesmaids since most friends and family would be happy even as guests.

Is 7 Bridesmaids Too Many?

The only consideration is that picking too many people at the wedding party will affect your budget, and the venue might not be meant to accommodate large crowds. Furthermore, you have to consider your groom-to-be so that he won’t have to compromise with the number of people for his groomsmen.

Try having the same number of bridesmaids as the groomsmen to be safe. This should also ensure that both people will be pleased with the final wedding party.

If you want to show gratitude to friends and family, you don’t have to force everybody to be a wedding party member. Read what is a receiving line to know more.

Can You Have 20 Bridesmaids?

Some people like to hold a large wedding celebration, so it’s possible to have many bridesmaids. While going over ten is too much, remember that it’s a matter of personal choice for the bride herself.

If you think these 20 women should be in your bridal party, then there’s no reason not to. Just be careful with a large wedding party to avoid drama or unintentionally make others feel overlooked.

Is It Okay To Have 3 Bridesmaids?

It’s okay only to have three bridesmaids. Some brides even only have two or none as long as you’re happy with the people standing by your side at the wedding.

Should The Groom’s Sister Be A Bridesmaid?

You are not expected to include your significant other’s sister as your bridesmaid because the bridal party is decided by you only. In the end, the decision will be based on your closeness with your fiance’s family to avoid hurting someone’s feelings.

The average wedding size can range from 80 to 200. Some people prefer an intimate wedding, while others might find a 100-people event too small.

And that’s it! You just learned how many bridesmaids are there in a wedding, which revealed no right or wrong number.

We hope this helps; leave us a question if you have any.