Perhaps one of the most common questions that the lovers of oriental lilies ask is, “How long do oriental lilies bloom?” Anyone who wants to brighten up their garden landscape wouldn’t be disappointed if they add oriental lilies to it. These fascinating blooms that come in different colors, shapes, and sizes can instantly bring life to your outdoor living spaces.

In case you’re not aware, lilies were generally spotted in grasslands, the forest, marshes, as well as mountains. However, today, you can find them in residential and commercial gardens across the globe. If they’re grown in the appropriate environmental conditions, lilies can thrive really well. 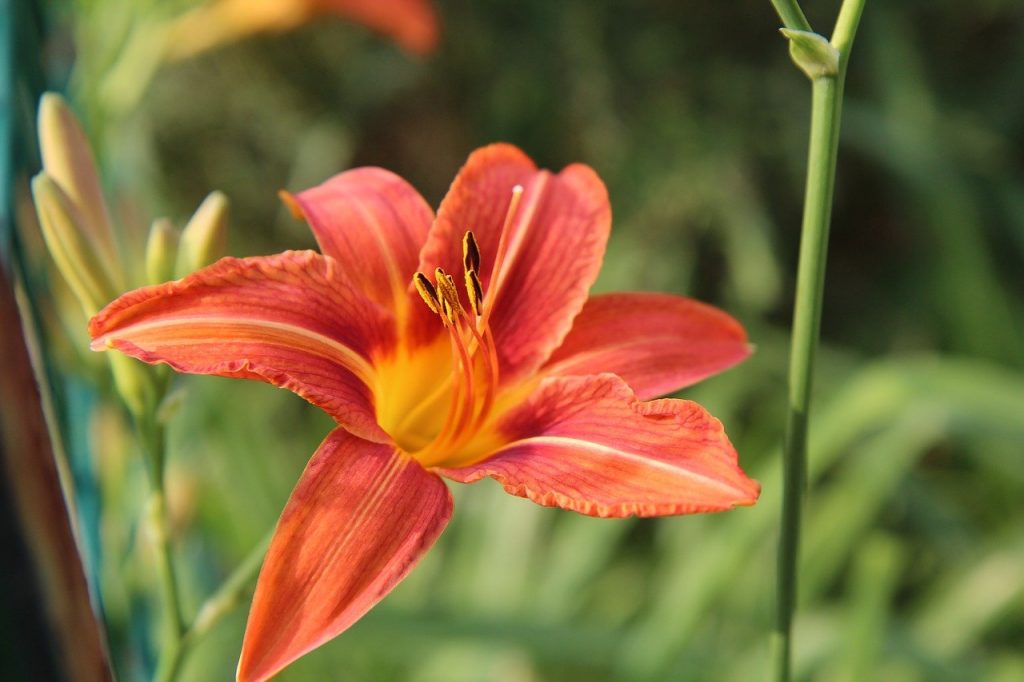 Table Of Contents
1 Facts About Lilies That You Need to Know
2 Different Types of Lilies
2.1 Asiatic lilies
2.2 Easter lilies
2.3 Trumpet lilies
2.4 Oriental lilies
3 How To Grow Oriental Lilies
4 Why Give Greenhouse Gardening a Try?
5 Final Thoughts On How Long Do Oriental Lilies Bloom?

Facts About Lilies That You Need to Know

Did you know that around 80 to 100 species of lilies exist worldwide? You can find many of them in the United States, Canada, Japan, India, as well as Europe. Most Europeans love lilies so much that these plants instantly earn a spot in their gardens and homes.

Who doesn’t love lilies? They’re a popular choice for center bouquets and centerpieces! What’s more, this plant is associated with various symbols around the world. They represent fertility, beauty, fresh life, and rebirth.

In China, lilies are believed to bring good luck and a strong and lasting marriage. On the other hand, the Assyrian civilization believes that lily flowers are holy. Additionally, lilies also represent motherhood according to the Greeks.

However, despite their innocent beauty and vibrant colors, lilies are highly toxic to cats.  Be sure to keep your cats away from this plant!

Did you know that Callas, waterlilies, and daylilies are not actually lilies? Daylilies look similar to true lilies, but they’re not considered as such. The difference between both lies in the number of petals, anthers, and how they bloom.

There are different varieties of lilies that are popularly cultivated across the world. These include Asiatic, Easter lilies, Oriental lilies, and Trumpet lilies. Two of the most popular types are the Asiatic lilies and the Oriental lilies.

Asiatic lilies come in a wide range of colors including various shades of pink, orange, vivid yellow, and red. Although they don’t have fragrance, they’re hugely popular among florists. Furthermore, Asiatic lilies only grow about two to three feet tall, making them the shortest among all lilies.

Easter lilies, as the name suggests, are forced to bloom during Easter. Although this holiday plant is usually grown indoors, many greens aficionados who live in the warmer regions of North America also grow them outdoors after the blooming season.

These lily flowers are called trumpet lilies for good reason. Compared to the other varieties, they produce smaller flowers that are shaped like a trumpet.

Among all types of lilies, the oriental lily is the most fragrant. In case you’re not aware, their scent is at its strongest when it’s nighttime. Originally from Japan, they grow taller than Asiatic lilies and could reach a height of about 2 to 8 feet!

How To Grow Oriental Lilies

Various lily varieties have different bloom times. However, all of them start to grow when the ground gets warm. Oriental lilies start to show off their gorgeous blooms of pink, white, and yellow, just when the Asiatic lilies are about to fade.

Since oriental lilies bloom in the late summer to early fall, they’re known to be the last variety of lilies to bloom. Additionally, they produce blossoms for up to two or three months. While most lilies prefer the summer heat, Oriental lilies thrive well in much cooler areas.

It’s important to note that they don’t thrive in boggy soil. They prefer rich and well-draining soil. To increase drainage and nutrients, you may add organic materials to the clay soils.

Oriental lilies also need to get at least 6 hours of full sun on a daily basis. They grow best when planted in groups with at least three to five bulbs spaced eight to twelve inches away from each other.

Whether you’re planning to start your own garden or upgrade your existing one, consider trying your hand at greenhouse gardening – especially if you’re growing lilies. Although the growing and blooming seasons for each lily variety differ, greenhouses can make it possible for you to enjoy their vibrant and colorful blooms regardless of the weather outside!

In case you’re wondering, the greenhouse’s enclosed space protects your plants from inclement weather and allows you to manipulate and customize the growing environment according to your plants’ needs. Aside from the fact that you won’t have to shield them against Mother Nature’s whims, you can also extend their growing season!

It doesn’t matter if you decide to set up a hobby greenhouse, a mini greenhouse, or a semi pro greenhouse – the structure is more than able to provide your plants with a protective barrier against destructive insects and vermin!

Final Thoughts On How Long Do Oriental Lilies Bloom?

If you’re considering growing these bright and beautiful flowers to make your garden look extra special even during the coldest time of the year, consider growing them in a greenhouse. The next time somebody asks you, “How long do oriental lilies bloom?”, you can tell them about how a greenhouse can extend their blooming season.

If you’re a newbie gardener who’s looking to find ways to hone your skills, you’d want to learn how to prevent root rot in hydroponics even before this problem affects your plants.

Hydroponics can be advantageous to crops in more ways than one. However, it also comes with risks of diseases, such as root rot, which can be destructive or even lethal to your plants.

Unfortunately, there are no effective methods to recover the wilted parts that were affected by the root rot once it hits your plants. The only thing you can do if you do not want this catastrophe to befall your crops is to prevent it before it happens. Read on to learn more about this subject.

What is Root Rot?

Root rot is a disease that attacks the plant roots and causes them to suffer decay. This usually happens when a lack of oxygen supply occurs in the substrate.

To give you an idea, think about plant roots that are submerged in water that only has a little oxygen in it. Over time, the plant suffocates and dies.

Aside from rot and decay, this disease also leads to the proliferation of fungi that are naturally present in the soil. These include Rhizoctonia, Alternaria, Pythium, Botrytis, Fusarium, or Phytophthora. As soon as fungi colonies start to grow, they tend to target the weakened roots and infect your precious plant babies.

Once the plant becomes infected, they won’t be able to take in what they need to grow – water, oxygen, and other nutrients. When this happens, it won’t be long before the plant dies.

In case you’re not aware, the term hydroponic is derived from a Latin word that means “working water”. To put it simply, hydroponics is an art that involves growing various types of plants without soil. If you’re like most people, the first thing that comes to mind when somebody talks about hydroponics would be a picture of plants with roots suspended into the water without using any type of growing medium.

Detecting and identifying root rot can be tricky. When your plants get infected, their leaves and roots gradually wither until the whole crop itself dies from the lack of nutrients, which is a common symptom of many diseases.

What causes root rot in hydroponics?

One of the requirements in hydroponics systems is oxygen. Without it, your plants are basically on the road to death. On the other hand, lack of such is one of the major triggers for root rot, and it must be avoided at all costs.

Just like when planting in soil, you loosen up the ground so that your plants’ roots can have their required intake of oxygen. That is the case for crops grown in aqueous solutions as well. If they cannot breathe, they would not be able to grow.

Another agent for root rot is the temperature. The last thing you would want in your system are parasites that leech nutrients intended for your plants and infect the water during the process. In common terms, these fungi are called molds.

One of the best breeding grounds for these is warm and moist areas. For this reason, if the water temperature inside your reservoir is high, then you are susceptible to it. Something as minor as letting the solutions exposed to sunlight can already be a risk factor.

3 Useful Tips on How to prevent root rot in hydroponics

There is good news! Root rot in hydroponics can be prevented! Just follow these tips:

Tip#1: Use the right air pump

If you do not want root rot to affect your plants, you merely have to avoid its causes. If you need oxygen, keep the water bubbling by providing an air pump of appropriate size, and also give importance to proper ventilation in the room.

The temperature should be maintained within the 70 to 80 degrees F range. Get rid of any materials that can make your system vulnerable to infections, and make sure not to disturb your crops while they are trying to grow.

Tip #3: Get rid of the rotten parts

However, if you failed in preventing the disease, then the rotten parts should be removed immediately. Cut them off as there is no chance of reviving them, and focus on the potential new growth instead. Fix your hydroponics system and eliminate the risks.

Greenhouse gardening offers numerous benefits to greens aficionados who dare to take their gardening experience to the next level. Aside from acting as a shield against the effects of inclement weather, a mini, hobby, or semi-pro greenhouse can also serve as a protective layer that keeps harmful bugs and critters at bay.

What’s more, its enclosed structure allows you to control your plants’ growing conditions including the temperature, light, moisture, and ventilation of the greenhouse’s internal environment. With a controlled environment, you’ll be able to extend growing seasons and grow plants that aren’t native to your area.

No matter how well-informed you are about how to prevent root rot in hydroponics, you cannot completely eradicate the risks. Therefore, to avoid the worst-case scenario, you should be prepared to sacrifice the infected for the sake of others. While you’re at it, consider trying your hand at greenhouse gardening as well.

Ann Miller
Posted in:
Planting
Previous article
How To Start Canna Seeds in 2 Simple Ways
Next article
How To Get Drool Stains Out Of Pillow Successfully
Leave a Reply Cancel reply
Load More